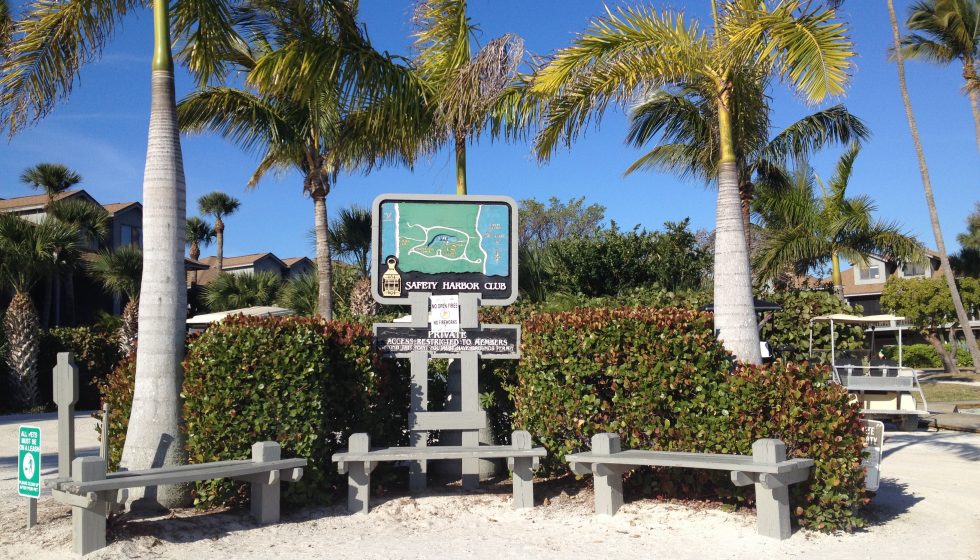 Waiting for the boat to Upper Captiva, I saw an angel in tennis shoes standing on the dock with a foot locker.  I asked the angel to share the shade of the Chickee Hut with me.  We sat, side by side, at the picnic table facing the Island Girl docks.  Looking out at the water in the same direction in silence. After some time, without turning his head the angel asked, “If you where a team, what would your mascot be?”

I was surprised by the question and replied, “I don’t know. I guess it would be some kind of bird?”

The angel smiled in agreement,  “That’s a good answer.  A bird.  Piper used up all the bird mascots already.  I flew Thunderbolts in WWII before I became a missionary. Thing about a P-47 is that you can beat the hell out of it and it’ll keep flying. Not like the mustang, all fussy.  That was everybody’s favorite and got all the glory.  The Thunderbolt was the hero. I’m a runner, maybe that’s why I’d pick it for a mascot.  The Thunderbolt just kept running no matter what you did to it.”

He turned his head back to the water, “The boats here,” gesturing for me to go first, he added, “Welcome to the Isle de los Captivas.”

Upper Captiva Island is part of a chain of islands on the coast of Southwest Florida scientist believe were formed from a storm.  Originally one island , the Calusa Indians were there first, 2500 years ago, and left their shell mounds behind.  Legends say Ponce de León landed there looking for the Fountain of Youth, and named the island Santa Isybella after Queen Isabella in 1513.  It is the Pirate, the mythical Buccaneer José Gaspar, that split the island in two with his tongue.  The northern half he named Captiva – the ‘Island of Concubines’ were he kept the women he planned to ransom.  The southern half he named Sanibel – for the beautiful lover of his first mate, Roderigo Lopez, in Spain.  In the early 1900s hurricanes blew though and created three separate islands – Sanibel, Captiva, and Upper Captiva, alternately called North Captiva.  You can only reach Upper Captiva by plane or boat, there are no cars and no roads.  I was about to spend three months there, alone. I was going into exile.  A beautiful exile, but an exile non-the-less.

The angel in tennis shoes was old.  His name was Bob and he introduced me to his wife, Sue Ann, as ‘the Island’s new lady pilot.’   Sue Ann told me it was soon to be Bobs 90th birthday.  She invited me to come over for Sunday service at their house and see the BD-5 airplane Bob was building in their front yard after I had unpacked.  There were no other tourists on the boat except me, so Sue Ann introduced me to the SOB’s, one by one.  The Captain Bob, the Mate, Jimmy and two residents all making the hour crossing from Pine Island Sound.

After the introductions Bob said to the Mate, “She’s going to be a local, show her your real name Jimmy.”

Jimmy opened his coat and inside, behind the embroidered name sewn on the outside, was a plastic name tag.  The name tag read ‘Jimmy Tip Me.’  Everyone on the boat laughed and the Captain added, “He’ll mutiny if he don’t get good tips.”

Jimmy hit the Captain’s arm and pointed to the water just beyond Cabbage Key.  The Captain told everyone, “Hold on.”  He swung the bow around, in a wide circle, doubling back outside the channel as Jimmy walked to the stern of the boat by me.

“Look we got you a welcome present.”  as he pointed to my right.   Two dolphins jumped and dived and laughed in the boat wake beside us. They played in the wake as we crossed the last few miles through Captiva Pass.

I had survived my middle of the night exodus from Lake Geneva and arrived safely, at Safety Harbor. Already captivated by parishioners, pirates, and porpoises on my journey to the enchanted Isle de los Captivas.