A NASA report is a paper confessional, an anonymous form for pilots to send a mea culpa to the FAA through the Aviation Safety Reporting System, protecting us from prosecution if we break a regulation. It doesn’t offer forgiveness if we’ve been intentional, criminal, or habitual offenders, just when we make an honest mistake and own up to it. Mistakes like forgetting to maintain an assigned altitude, cutting the edge of Class B airspace too close, or unintentionally breaking one of the thousand’s of FAA rules we’re supposed to have memorized by heart. It’s a blanket form acknowledging the burden of being human.  Of being tired, distracted, overworked, unsure, or confused.  Protecting us in case there’s an investigation. NASA forms are quite beautiful and simplistic. Hundreds of thousands of honest admissions of shared mistakes, our conscience collected and analyzed somewhere within a giant, lethargic, forgiving brain.  All in an attempt to make a system that has become impossible for pilots to navigate, a little better, a little kinder.  It’s not perfect but neither is any apology, so I’ve adopted it as the form I use for how to apologize. Apologize quickly, within 10 days. Apologize specifically, say I’m sorry for exactly what you did, in detail, without expecting a response, or forgiveness.  Forgive yourself for being human and making a mistake. Collect the data from your own mistakes to stop making them, and filing the same apologies over and over again.  Then share what you learn with others, so they can learn and laugh along with you at your mistakes! 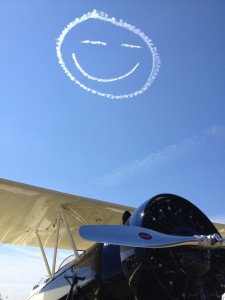 10)  Lock the dipstick, dipshit – Oh no you di’int, oh yes I di’id!  FYI, if you do aerobatics with an unlocked dipstick in a Stearman it will depart the aircraft along with a fair amount of oil, causing you to land immediately at the nearest airport.  Then you will slip down the oil soaked wing-walk, departing the aircraft on your butt, looking like the fool that you are.

9)  If it moved, you touched it – There is a duhhhh moment when the engine quits and you sit there in disbelief, as if gremlins just hijacked the airplane.  Thankfully it is the same moment that your co-pilot, in this case Mike Araldi, bursts into laughter and pushes IN the fuel mixture knob that you just pulled OUT, thinking it was the carburetor heat…duhhhh.

8) Color theory for dummies: red is fuel and blue is propellor – If you are changing propellor pitch and the engine starts to quit, you are perhaps moving the wrong control knob. That is why they are color coded, Sarah…duhhhh.

7) Weather is whether – You’re NOT that special Sarah, and no one HAS to be anywhere!  That is the biggest lesson of all – learning that my perception of “a lack of time,” was an illusion of my ego.  The world will not spin to a halt if I do not arrive at the time I said I would, ever.  Now I relax and just get there when I get there!

6) Newton’s Laws of Motion apply to ME – Tailwheel airplanes are very unforgiving, especially on pavement. If the horizontal axis of your plane is not aligned with the runway direction, Newton’s First Law causes the aircraft to continue in the direction it is headed, i.e. off the side of the runway.  To avoid ground-looping I became highly proficient in hopping runway signs as my airplane careened into the grass.  Newton’s Third Law causes you to develop excellent negotiation skills.  As a result of my bad landings, I got better and better at explaining to the tower why I was now OFF the runway, that I had been cleared to land ON.

5) Don’t be a knot head – Take it from me, flying in 30 mph winds is not fun.  In fact anything above 15 mph just isn’t fun, and I choose to make my flights as much fun as possible.

4) Never fly for the money, honey – I have taught people to fly for almost 20 years and some of them SHOULD NOT have been flown, but they bought a flight so they got a flight. It has taken me 18 years to come to the absolute conclusion that I absolutely, positively have the right to refuse to fly with any person, for any reason, at anytime.

3) The aircraft is NOT a desk – I have watched as my logbook, coat, sunglasses, cell phone, lunch, shops towels, hat, and hair ties flew off various surfaces of my airplane while I taxied out, having completely forgotten I put them there.  Interesting fact, you can fly all the way from Valdosta, GA to Tullahoma, TN with your watch hanging from the pitot tube in a Stearman.

2) Dark clouds are angry, run now! –  A little bitty dark patch of clouds moved over Rib Mountain in Wausau,WI while we were selling rides at the Balloon Festival. We just sat there watching them float by, doing nothing to get into the hangar, and within 10 minutes all hell broke loose!  Hail rained all around us as my Stearman went airborne on the ramp.  Chuck Gardner tried to taxi him to the safety of the big hangar and I ran ahead, screaming like a mad women, to get John Chmiel to open the door.  The wind was so strong he couldn’t open the hangar or it would break the door.  The kindest family I have ever known laid with me across every surface of my plane to hold him down, getting pelted with pea sized hail and 50 mph winds, listening to me screaming until the storm passed.

1) When you have to land, land anywhere you have to – I have made some horrible cross-country weather calls, which have landed me in all sorts of unexpected places.  The most memorable one was landing at a closed airport in Indiana in the grass on the side of the runway, because the runway was torn-up and covered with construction equipment.  Then four wheeling my Stearman through the construction zone, with workman pulling on my wings to help me taxi across the rubble and rebar.  Trying to get to the wind block from the t-hangars on the other side of the closed runway before the gust front hit.  When I shut down, an older gentleman walked out of the manger’s office to the nose of my Stearman and said flatly, “Miss, the airport is closed.”  My hands were shaking and I was about to cry. I pleaded, “I’m sorry, I know that it’s closed and I landed in the grass, but the weather is coming in really fast and I have nowhere else to go.”  He winked at me and said, “I’m the manager, I won’t tell if you wont tell.”  Then he helped me tie down and cover Blu and drove me to McDonalds in the rain, so we could eat lunch together.  I bought a GPS with weather radar the next day.