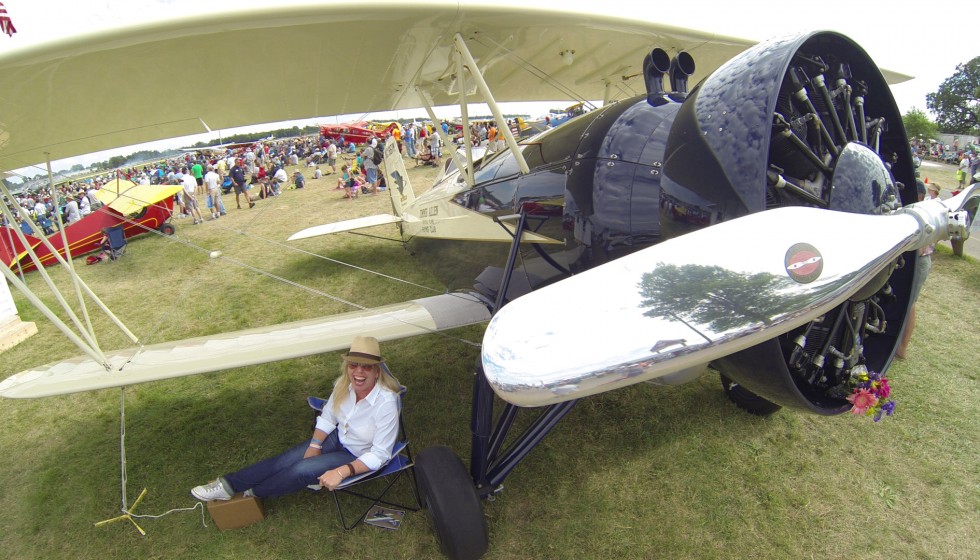 When people ask me what I do, I reply, “I’m a Barnstormer.”  When they give me the curious look that says, “huh?” I simplify it by saying, “I’m a pilot.” The response I hear most often is, “Oh, I hate to fly.”  Those words, “I hate to fly,” have stuck in my head for years because I know the essence of flying.  I know what it feels like, and smells like, and tastes like to fly.  When I hear that someone “hates it,” I know they don’t know what it is, to fly.  I live in and fly in a time lost to most.  A Golden Age for aviation in the 20s and 30s, a time when no one said the words, “I hate to fly.”  Even back then people might have been afraid to fly, after all we don’t have wings but legs, but no one knew to associate hate with flying.  Flying was about possibility, the shared hope of where we could fly to, and what would be waiting for us there over the horizon.  Even though we can see on Google maps what is over the horizon on every inch of the earth today, that hope and possibility is still inside each of us.  Flying has nothing to do with airline transportation, it is something that is carried within us.  I believe the idea of flying belongs to everyone, and when you say, “I hate to fly,” you’re subordinating the most authentic part of you that was born to fly.  Shutting down the desire we all share to rise and fly up, above our lives and our limitation.  As children some of our first words are “UP” or “FLY” when we hold our arms out, to be lifted up, again and again by our parents.

For twenty years I’ve been thinking on the nature of flying while flying, and the nature of UP as a Flight Instructor.  Teaching people to control their minds and bodies so my planes can teach them how to fly.  I’ve spent years below the clouds and just above the tree line, studying the wind, negotiating with the weather, smelling altitude, and listening for airspeed.  A cartographer on a human scale, learning every pebble of my route by heart.  Because of this I understand the world view of legendary pilot/poets, Antoine de Saint-Exupéry, Beryl Markham, Charles Lindbergh and Anne Morrow Lindbergh.  I see today what they saw as my future, and I feel how it broke their hearts.  They saw what was lost to all of us when flying became quickly and cruelly defined as transporting people and weapons, higher and faster above the clouds, sealed in pressurized metal tubes.  Squeezing us in with less humanity than Temple Grandin’s cattle herding gates, and how the planes that brought the hope of connection, would be turned into a source of disconnection and fear.

Charles Lindbergh, who shared my cockpit literally, having flown my plane in 1930, wore his disillusion like armor after he saw this beautiful winged technology being used to destroy.  Antoine Saint-Exupéry, the pilot/poet who shares my cockpit in spirit always, was also disheartened when he wrote of a “little Mozart condemned,” in his book Wind, Sand, and Stars.  After traveling on a train St. Ex was exhausted and discouraged looking at the hopelessness of war-torn Europe’s poorest immigrants, and wanted to give up, when he saw the face of a little boy sleeping between what he called, the sluggish scum.  He wrote, “This is a musician’s face. This is the child Mozart. This is a life full of beautiful promise. Little princes in legends are not different from this. Protected, sheltered, cultivated, what could not this child become?  When by mutation a new rose is born in a garden, all the gardeners rejoice. They isolate the rose, tend it, foster it. But there is no gardener for men.”  My friends Slim Lindbergh and St. Ex were wrong.  I do not share their disillusion.   I choose to believe we are all gardeners of men, and it is our responsibility to not give up on each other, but to lift each other up, so we can all fly UP together.

Being a pilot teacher is really just being a social philosopher, a professional observer of people and places, teaching others to develop a greater vision of themselves and their world.  Teaching for me is making a connection from the unknown to the known, and pairing everything down to the fewest words and the most childlike imagery possible.  I no longer teach people how to be pilots.  Instead I teach them that the idea of flying belongs to them, so they can carry it with them, even if they never fly an airplane again.  Truth is, flying belongs everyone, and it’s different for everyone.  People are flying on motorcycles, they’re flying in boats, and with model airplanes.  Flying down country roads on horses, flying in their cars with music blaring, flying in their parents arms, in wing suits, on dance floors, and surfboards.  Millions of people are flying each day with their hands arched like airfoils out the windows of vehicles all across the world.  To understand what I see in the air, what I’m looking for, is to accept that the dream of flying isn’t about airplanes, it’s about us.  Flying is not an air race, competing against each other to see who can get higher and farther the fastest, arriving first and alone. We are an air race on a lifetime of first flights.  Starting with our first breath, first smile, first step, first leap, first kiss, first move, first job, first success, first love – they’re all the same.  A first flight from who we were, towards becoming who we can be.  What connects them, binds them to us, is the joy we feel beginning each first flight as a free fall toward freedom, believing in the unseen, believing we can fly.

In 2013 I had become a very unprofessional barnstormer, professionally wandering off course in search of the feeling that still captivates me. Struggling with WHY?  Why I do this when I don’t make a dime, and I don’t make a dent. Feeling my plane was too big for ride hauling and I was too small to make a difference.  What do I do when I realize I can no longer do what I’ve always done, the way I’ve always done it?  You start over, leap, free fall, sell everything you can’t live without and first flight forward.  For twenty years of flying I’ve held on to one thing, believing my passengers were like pennies, if I picked each one up, someday I would be rich.  On September 26, 2013 I had the perfect flight and I saw that I was rich, and I found my why.  That flight changed everything for me.  So in 2014 I begin the year with a simple quest – I want everyone to believe they can fly…