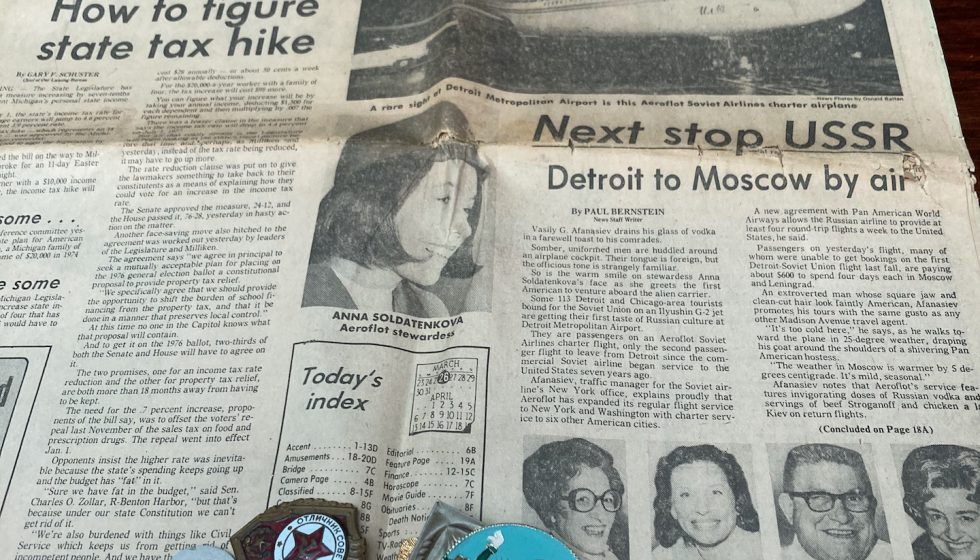 A Suitcase of Serendipity

Open a chart.  Find a place.  See a picture without a face.  Follow a back, back in time.  Turn a question over in your mind.  Connect the dots across a map.  Turn around and retrace your steps.  Climb up your family tree, to get a clearer view.  Why do we travel to the places we do?

If we could chart all our movements on a map, would there be a key to our geography?  Mark each place you’ve been, add events that happened there, and then look for connections between them.  When I was Barnstorming, one season I unintentionally mapped my flying chronologically from June-October in 2013.  It came out in the shape of a butterfly.  Wouldn’t it be interesting to do the same thing over the course of a lifetime?  I like looking back at events and finding meaning in them.  Seeing serendipity staring back at me.  We’ve all had them.  A unexplained detour, a mysterious stranger, a missed connection, a good samaritan.  Traveling packs an extra suitcase of serendipity, and sometimes zemblanity.

Serendipity is “to make pleasant and fortunate discoveries of things unsought.”   A word credited to Horace Walpole in the 18th century when he made popular Michele Tramezzino, The Three Princes of Serendip.  A tale about three princes who were always discovering things, by accident and sagacity, they were not looking for.  Remember Newton’s third – forces always come in pairs – equal and opposite action-reaction force pairs.  The antonym of serendipity is zemblanity.  Penned by William Boyd, Zemblanity is “to make unhappy and unfortunate discoveries occurring by design.”  There is a geographic opposite of the warm and lush Serendip as well.  It is the cold and barren Zembla.  Short for Novaya Zemlya, also known as Nova Zembla.  An archipelago, off the thumb of Murmansk, used for nuclear testing in Russia.

Aeroflot had begun air charter service from Detroit, Michigan to Moscow, USSR in the fall 1974.  We were among the 113 passengers on the 2nd eight-day tour to Moscow and Leningrad (St Petersburg) in the spring of 1975.  Sitting next to me, on the Ilyushin Jet, was a man wearing a black suit with a white turtleneck.  His shoulders spread out past his aisle seat, back onto mine.  He introduced himself with a long name that was too big for my mouth to pronounce.  He said, “Just call me Father.”  Father was a Polish Catholic priest, with a parish in Detroit. He explained to Mom and me, on our flight to Moscow, that many of the passengers on the tour were former Soviet Jews who had emigrated to the US from Nazi-occupied Soviet territories in WWII.  Father was traveling with the Jewish group to try to unite them with family members, still living there.  Russia was much different in 1975 and in an aggressive phase of anti-religious persecution.  A Catholic Priest, traveling with a Jewish group, were NOT USSR desired tourist.  We were landing in Zembla.

I grew up an American, Midwestern, middle-class, white girl.  The only discrimination I’ve ever known was on the playground, when some kid’s didn’t think I was cool enough to play with them.  From the moment the tour landed in Moscow we were harassed.  Our suitcases were searched daily but nothing was ever taken. When Father came to our hotel room to talk my parents would turn up the radio, speaking close to us beneath the speaker because the rooms were monitored.  The relatives of people on the tour, who were brave enough to come to the hotel, were afraid of persecution by the Council for Religious Affairs.  None of them spent more than 30 minutes with relatives they hadn’t seen in over 30 years.  The price was too great. The thing I was most looking forward to was denied for the tour at the last minute, the ballet.    Reservations were cancelled. We were bused to a communist propaganda puppet show instead.  The Bolshoi Ballet was taken away.

“Chewin Gum?” the boy in the Leningrad metro said.

He moved closer.  More of a demand this time, he said louder, “Chewin Gum!”

Father nodded to me it was safe for the exchange.  In 1975 I held out a handful of Bazooka bubble gum.  The boy in the metro opened his hand so I could point to the Russian medal I was interested in.  We would take turns. I would point to a medal and he would hold up a number of fingers, to indicate how many pieces of bubble gum he would take in trade.  Father laid a small silver medal on top of my bubble gum.  The boy took the medal without taking any gum.  A whistle sounded.  Two Politsiya came. The boy in the metro station was taken away.

That trip was as full of zemblanity as it could get except for Father.  He would take my mother and I to the public markets with him.  In hind-sight I think he wanted to blend in to the public as a family, if my brother and father were there he couldn’t do that.  He spoke Russian to the vendors but when it was time to pay, he would hold out his hand.   Among the rubles were small silver medals.  The same kind he put in my hand in the Leningrad metro.  None of the vendors took the coins, they only took the medals.

When we flew out Russia, Father sat next to me again for the trip home.  After landing, the passengers clapped and cheered when the stewardess opened the cockpit door for all of us to see – the Pilot’s celebrating our successful landing by toasting each other with shots of Russian Vodka.  “Na Zdorovie.”

Amid all the noise, Father lifted my right hand and placed a small Saint Christopher medal, the patron saint of travelers, in the center of my palm then wrapped my fingers around it, like a package.  He whispered to me, “Remember me I…,”  Father stopped and started his sentence again, “Remember me. He will always protect you.”

A week after our trip, back in Fort Wayne, it was time to write “thank you notes.” A lamentably lost art in childrens ‘to-do lists’ today, but we didn’t have an address to send to.  I was circling the phone cord around my waist, pirouetting, as Mom dialed the Archdiocese of Detroit to get Fathers address. Mom unspun me, and the phone cord, to share the black receiver in my ear so we could both hear.  The receptionist replied to Mom’s question, “There is no one here by that name, but I’ll look if he is somewhere else in Michigan,” later adding,  “I don’t see any priest in the state directory with that name either. I’m sorry.”