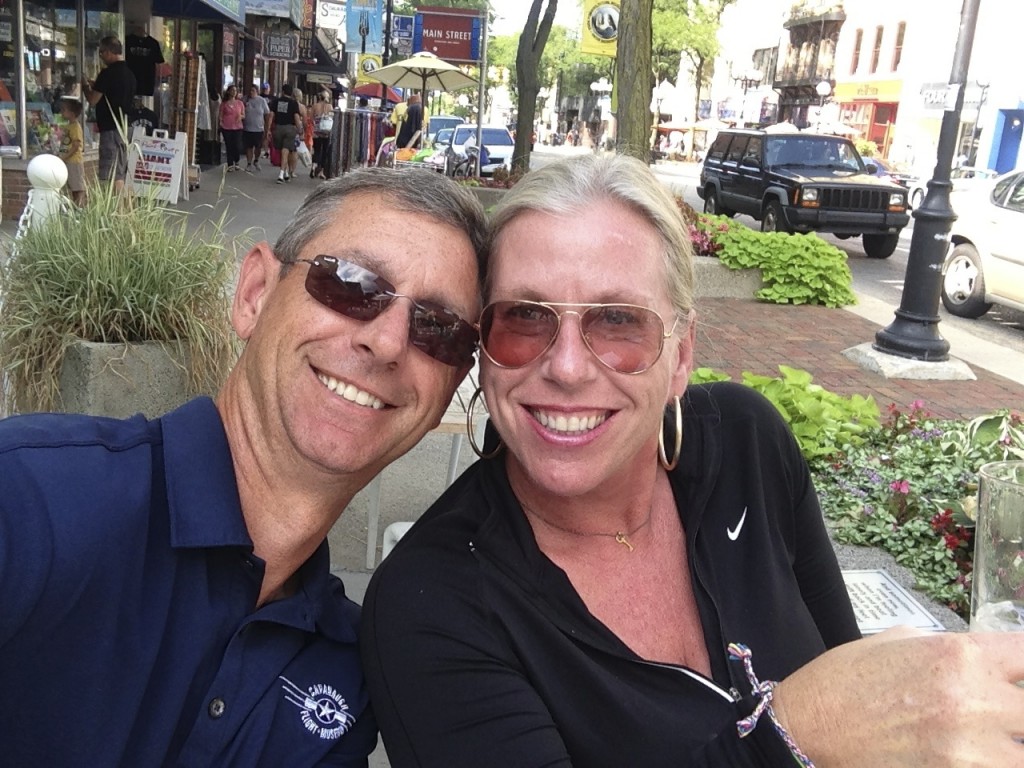 I’ve been wearing a necklace, with a gold key, since the 4th of July. I bought it as a present for myself while shopping in a small town south of Nashville, on a day that was so drenched with rain that they couldn’t even do cockpit tours in FiFi.  Everyone from the tour had happily gone back to the hotel to catch up on sleep but me.  Even though it was pouring, it was the 4th of July, and I wanted to do something fun. I found Franklin, Tennessee and walked through all the shops in the rain, and in one store there was a collection of local artist’s jewelry.  I looked at the choices and a necklace with the antique gold key, hanging from a bronzed silver chain, was the one I loved the best. I get questioned about it all the time now, and each time my answer is the same, “I don’t know what the key is for, I guess I’m wearing it to find out.”

Keys are foreign to me. I never have more than a car key and a hangar key on my keychain, and when I’m given one I almost always lose it.  I grew up in a house I never had a key to.  Actually I don’t remember our door ever being locked.   I lived in the country where everyone traveled in and out of each other’s homes without knocking.  We just swung open the screen door, and yelled, “Hi, anybody home?.”  Everyone had access to the Wilson house, even the Milkman Rollie.  Rollie made deliveries twice a week, he just walked in the door, opened the refrigerator, and replaced whatever was missing. On birthdays he’d even leave my brother and I chocolate milk.  The dry cleaner delivered my dad’s shirts and hung them in the house, or in the garage.  All the neighborhood kid’s came and went, in and out of each others house’s to play or to see the new litter of puppies that were always in whelping boxes in someone’s garage, or basement. The dogs in our neighborhood traveled as freely as we did.  Each year there was a new litter of incestuously mixed, labrador retriever puppies to visit, at houses up and down the gravel road I lived on.  Our house was robbed one fall, and it was the neighborhood Newell boys who caught the thief.  They came to the house to see our puppies, and saw a strange truck leaving our driveway, then blocked it with their truck so the robber couldn’t get away.  Even after that, I don’t remember our door ever being locked. I believe one of the things that I love most about my open cockpit biplanes, is that there are no doors to lock, and no keys to start them.  I can just hop in, push the starter, and fly.

I drove into Lake Geneva, Wisconsin on a two lane road, different from the one I usually come in on.  I picked that road because I wanted to experience it like I was seeing it for the first time, as if I had never been there before.  As I drove past each shop or restaurant I’d look at it and wonder, is this going to be my favorite shop, my favorite restaurant?  I parked at Starbucks on Main Street, and went in to get a latte.  When I went into the restroom I hung my bag on the back of the door, and forgot about it. I picked up my drink and curled up in one of the leather chairs by the fireplace and drank my coffee, while I searched the Lake Geneva website for fall festivals.  After about a half an hour, I realized I didn’t know where my purse was.  I went back into the restroom, but it wasn’t there, so I asked the girl behind the counter if she had found a black bag?  She brought it out and handed it to me with a smile and said, “We’ve been waiting for you.”  I left Starbucks and walked down Main Street.  I was nervous.  This was a brand-new town and I didn’t know anyone but Bernie and Gayle.  I felt like it was my first day of school.  Would I make friends, would I fit in?   So as I walked I started smiling at everyone I passed, and they started smiling back at me, some even said hello.  I walked around the corner from the park and saw my apartment, it was beautiful.  Standing on the sidewalk in front of the deck, a man running the restaurant next door called out, “Hi” to me when I smiled at him watching me.  I went over to talk, and he told me his name was Bill, and that he used to live in Florida year-round, but now spends most of the year in Lake Geneva.  He was funny and friendly, and at the end of our talk he said, “I’ll look for you this weekend, when you move in Sarah.”  I giggled as I walked down to the boat docks.  I had just made my first friend, and he was cute too!  After I left the marina, I walked back to the realtors office and rented the apartment through January.  I asked the agent how I would pick up the key Sunday to move in?  He told me there wasn’t a key, just a keypad, and gave me the code for the door.  Perfect. 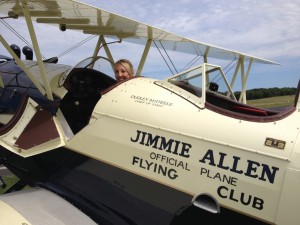 Gayle and I drove to Sam Taber’s place in East Troy the next day. It was a beautiful day, with “mares’ tails” swirling across the sky, and we were both excited to fly Buddy.  Gayle hadn’t flown in a long time, and was struggling with a desire to get back into flying.  She was battling the same fears we all have when we’ve been separated from something we love.  Will my skill still be there when I return?  Will I still remember how to do this?   It’s a form of separation anxiety pilot’s face. We build up in our minds that each time we go away from flying, it might not be there waiting for us when we get back.  But it always is, love is patient.  Sure you might be a little rusty, and you might have to practice to be able to do things you did before with ease.  But if you really love to fly, you have to leave it sometimes, and trust it will be waiting for you when you return.  My separation anxiety from flying is different now.  It’s much less about my skill, and more about the welfare of my plane when he’s not been flown. Radial engines need to fly.  On the drive to the airport, after not flying Buddy for three weeks, I was running all the emergency repair scenarios through my head of what might be wrong with him in my absence.  But I told myself Buddy would be just fine when we arrived, and waiting patiently for me, so we could go fly together again.  Sam opened the hangar door, and just as I had envisioned there he was, perfect, and gleaming.  The fuel leak had stopped, he had one small polite puddle of oil below his belly.  Buddy started right up and ran flawlessly. I gave Gayle the controls after takeoff and we flew low over the lakes and farm fields as I taught her to read the water and to crab to the left following the roads at an angle, to counteract the west wind.  The most important thing I told her was if she didn’t like what was happening, to let go of the stick, Buddy would just right himself.  She was a bit rusty, and a little bit timid on the controls, but she flew beautifully and smiled the whole flight. Flying had been waiting patiently for Gayle. 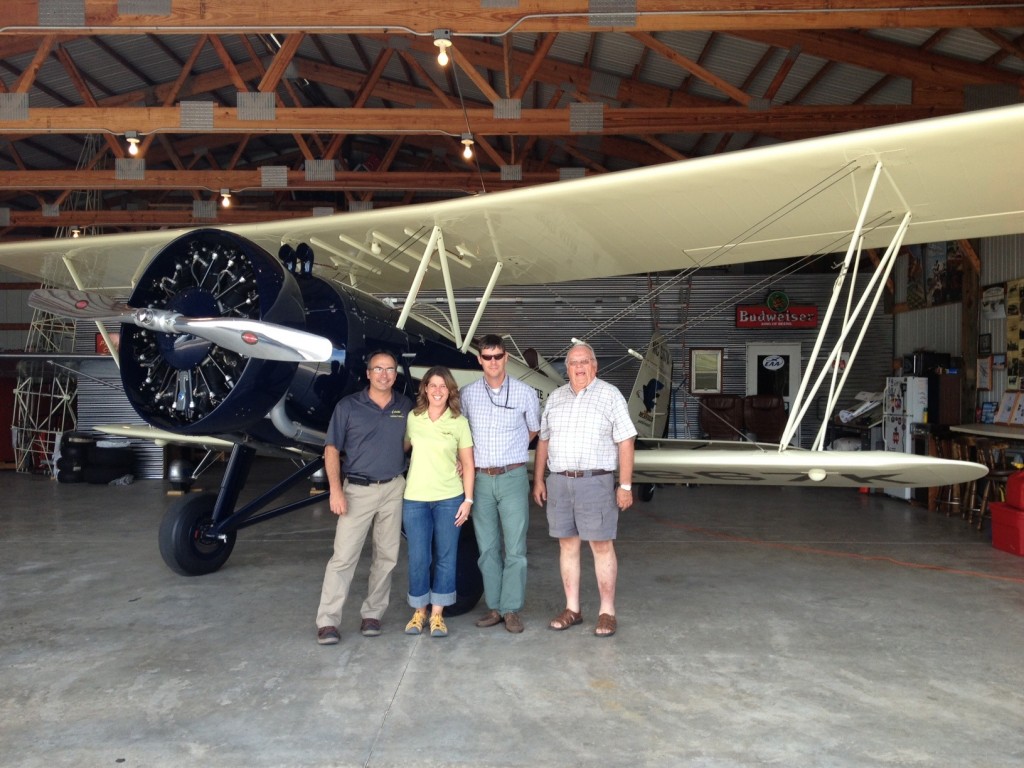 We landed on the north side of the runway, in the smooth thick grass at Hartford, and taxied to our welcoming committee on the ramp at Cub Air Fight.   After meeting the local pilots and media, we tucked Buddy into Dana and Paul’s hanger and took pictures to commemorate our homecoming.  Buddy was happy to have made his first friend as well, a little silver and blue Luscombe, and she was cute too!  After Paul closed the hanger door, his wife Dana handed me a key and said, “For you my friend, welcome.”  Dana, Paul, and Cub Air Flight had been waiting patiently for us.

I still haven’t figured out why I’m wearing the necklace with the key around my neck. Maybe it’s for the absence of keys and locked doors in my life, or maybe it’s for all the homes, hearts, and hangars I’ve been given keys to lately?  I don’t know, but what I do know is that there is something near me, that I have a key for.  It’s here, in somewhere, and it has been waiting patiently for me, for quite some time.