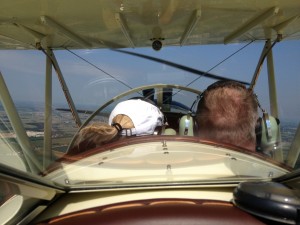 We left Hartford airport behind schedule for the Friday Iola Fly-in.  My friends, Bernie and Gayle and I had taken our time that morning, to make sure we had inflight snacks and Starbucks for the drive up to the hangar where Buddy was waiting.  We still had to fuel, and wait for Bill, who was flying his J-3 cub up to join us.  We were all making the flight north for a turkey dinner at a grass airstrip in northern Wisconsin called Iola.  It was a perfect Thanksgiving in September, and a homecoming for me.  “Sarah sighting’s” at fly-in’s are seldom.  Unless I’m barnstorming, I rarely go to large gatherings.   I am much more shy than my plane.  When I get a personal call or email asking me to come to a fly-in or event, I usually will, and have flown hundreds of mile off my course to attend.  I simply can’t go to all of them, so I select based on who asked me to show up personally, as a friend.  Jerry Graf, from the Central County Flyers, called and invited us after I had written their website asking about using the long runway, regardless of wind direction.  It was the only runway long enough for Buddy to land on and it’s not exactly Speedmail friendly.  Jerry and I talked about flying and what he was doing with a group of young people, building airplanes there on the field.  He made me feel so 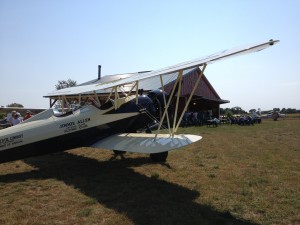 welcome.  The combination of his warm invitation and a warm turkey dinner, was the perfect excuse for us to make the trip.  What I found there was a family.  It wasn’t that the planes were all alike, there were nose wheel’s, there were tailwheel’s, there was even a seaplane on amphib floats.  What made it feel like a family, was the acceptance and genuine fellowship from everyone that greeted us in their red hanger with the stone fireplace. People smiled as we passed and introduced themselves, we were invited to help ourselves to seconds, and even offered a take-home box of leftovers.  After we said our goodbyes and loaded into Buddy, we took off across the meadow, and he waved his wings at Iola as we climbed to 800 feet and turned to the south.  I was thankful for the Thanksgiving fellowship at Iola, because going to vintage airplane fly-in’s alone for years, has rarely felt that way for me.

I’ve come to associate vintage airplane fly-in’s as the home turf of warring tribes, rarely a homecoming of family.  Don’t get me wrong, I believe in tribes.  I belong to lots of them, but the tribe that is closest to my heart, is the barnstormers. They are the most nomadic of all tribes, and known for being highly territorial.  Just that day at Iola I had gotten a text from my friend Josh Brownell, fellow barnstormer, with this friendly reminder, “I want you to know I considered your presence here in southern Wisconsin as an act of aggression.”  I burst out laughing when I read it.   That’s a line from the movie, The Great Waldo Pepper.  Barnstormer’s use it to remind fellow barnstormers that if they open shop too close to them, they’ll be poaching rides in their territory, and no one will make money.  This form of tribal territory marking is actually necessary in barnstorming as it is in any business.  If there are too many loggers in the forest, soon there won’t be any trees left to cut. If there are too many boats fishing the lake, they’ll be no fish left to catch.  Opening a shop right next to another shop, that sells the same thing is stupid and shortsighted, it puts everyone out of business.  I reminded my friend Josh that my plane was an hour north of his Lake Geneva territory, and that I charged twice as much as he did, so I was no competition.  I abide by the barnstormers code in business but not with people. I added that he and KerryAnn were expected for cocktails on my porch in Lake Geneva soon.  Tribes are powerful when united.  If you haven’t read Seth Godin’s book, Tribes, and are a leader of a company or organization, you should.  He writes that leaders of tribes are passionate individuals that share the desire to change things, and a willingness to lead, and unite the members of their tribe.  When leaders of tribes ignore that responsibility, and just go on preserving the status quo at all costs, never questioning if obedience is doing them or their organization any good, they are actually killing the tribe. Everything Seth writes is insightful, he’s a brilliant pattern watcher.   There are so many tribes in aviation, type clubs for hundreds of aircraft societies, I couldn’t begin to count them all.  There are warbirds, seaplane, experimental’s, aerobatics, light-sport, rotorcraft, Ladies Love Taildraggers, EAA, AOPA, VAA, WIA, AAA, SRA, and the list goes on.  There are many tribes because we’re all so different, and because we’re different, we like being a part of a group that looks like us.  This makes us feel like we belong somewhere, but warring tribes in aviation serve no purpose.  They only dilute the power of the tribe, and divide and weaken the whole – the family that each tribe is part of.  We have too many warring tribes in aviation, and I see some of their members as cannibals.  The cannibals are eating each other, and scaring the children away from our flying family. 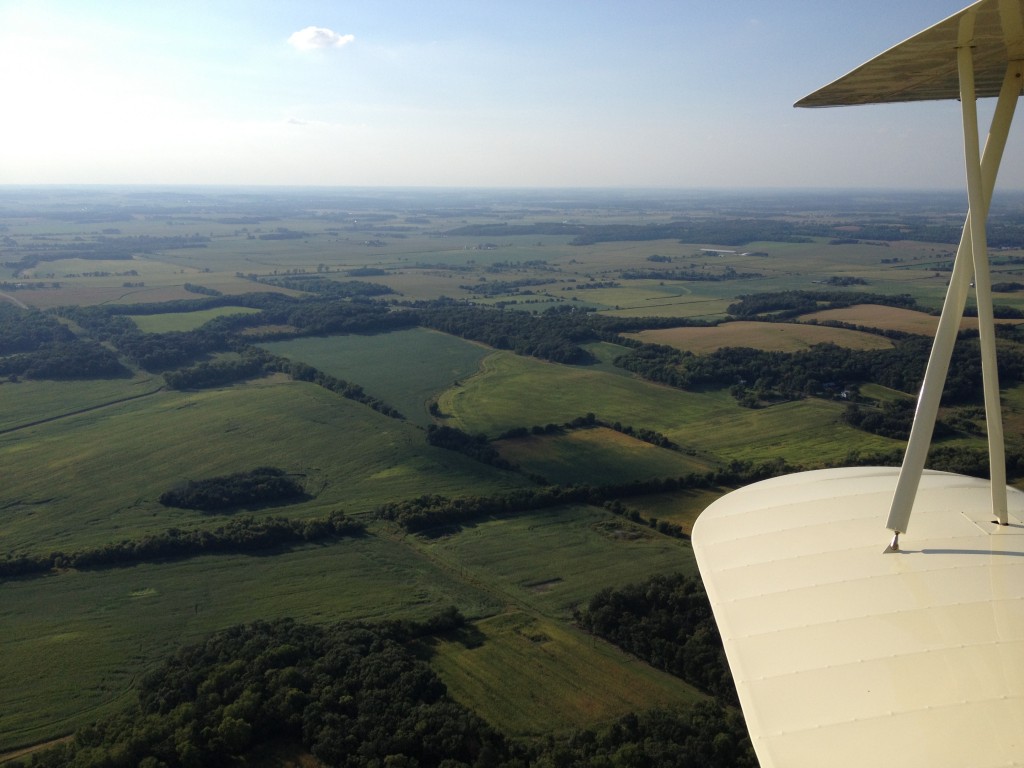 After we left Iola we headed south to the MAAC fly-in in Brodhead, WI at about 800 feet. I teased Bernie and Gayle that they had to keep talking to me, so I wouldn’t slip into a turkey tryptophan coma on the hour flight.  As we approached Brodhead the radio was buzzing with traffic.  We waited patiently and circled to the south for our turn to announce, “Speedmail left downwind for 27.”  I was feeling guilty for not being able to go to more of the fall vintage fly-in’s.  I hadn’t attended Blakesburg because I was going to be out west,  I had become a lifetime AAA member to show my support for the antique airplanes I love.  Mike Gretz, their museum director, had emailed and invited us personally, and Bob Taylor, AAA founder, had sent a lovely handwritten thank you note, and a book with my membership card. I didn’t want it to appear like I was playing favorites, but the day was beautiful and after leaving Iola we decided to see friends at Brodhead.   I gotten lots of texts and calls asking me to come join them.  After landing we taxied past the vintage fliers sitting under their wings, to the back hangars where my tribe of barnstormers was parked, and smiled and waved on our way.  We saw lots of friends, and many people waved back, but what surprised me was the number of pilots who didn’t.  I’ve attended airshows and general aviation events all summer, and with each taxi in, and each taxi out, people lined the airport fence waving like mad.  If you’ve ever spent time on boats you know that when they pass each other, everyone waves, it is the same with motorcycles.  Each tribe member is acknowledging the other one, celebrating their connection.  But at vintage airplane fly-in’s I am always mystified by the members of my tribe who don’t wave, or even smile, and just stare.  They are acting like cannibals.  The important thing to remember about cannibals is that they are more afraid of you, then you should be at them. Aviation cannibals are so fearful that they will lose what they love, by sharing it with strangers and planes that are different, that they’d rather see it die than overcome their fear and let go of petty grievances. Just because you passionately support one tribe, doesn’t mean you can’t belong to and welcome people from others. There are only two emotions, fear and love. Love is infinite, love is kind, and love is forgiving.

I moved into my Pinkhouse apartment on Sunday, after joining Dana and Paul at their CubAir Flight family open house that morning.  Everything was as perfect as I could imagine.  I had an armful of fresh groceries and flowers I had bought at Brennan’s Market, my new favorite grocery that I found on my commute back to Lake Geneva.  I was surrounded by so much love, in such a beautiful place, I got goosebumps sitting on my porch that night.  I was so thankful that I knew I’d sleep like a baby.  But at 3 o’clock in the morning I woke up to one thought, I had been a cannibal too.  I’d been called on some cannibal behavior in my past, by my friend Rob Lock earlier that week, when he reminded me that I held a grudge over money and he was right.  Donnie Hall who had built my tanks for Buddy, had mistakenly built them incorrectly, and they had been unusable.  I had not spoken to him since, and left the tanks in a pile outside his hanger. No excuse for the bad behavior and my avoiding a conflict resolution.  At the time I was afraid of my restoration getting delayed again, and about to run out of money, so I acted in anger, out of fear.  I thanked Rob for pointing it out to me, and I wrote Donnie an apology.  I asked if he would forgive me, and be my friend again. I was ashamed of my behavior, that I lost a friend over money, that I had I lost one of my Lakeland airport tribe over my fear.  We are what we see, and at 3am I saw a cannibal in my bed.  I heard from Donnie the next day, he wrote a very sweet reply, saying that we’d get together whenever I returned to Florida, and repair our friendship. I have more of those letters I need to write, to members of my tribe that I have been unkind to.  I’ll get through them all, one by one.  Good thing is, I have a beautiful porch overlooking the lake on which to write them from. 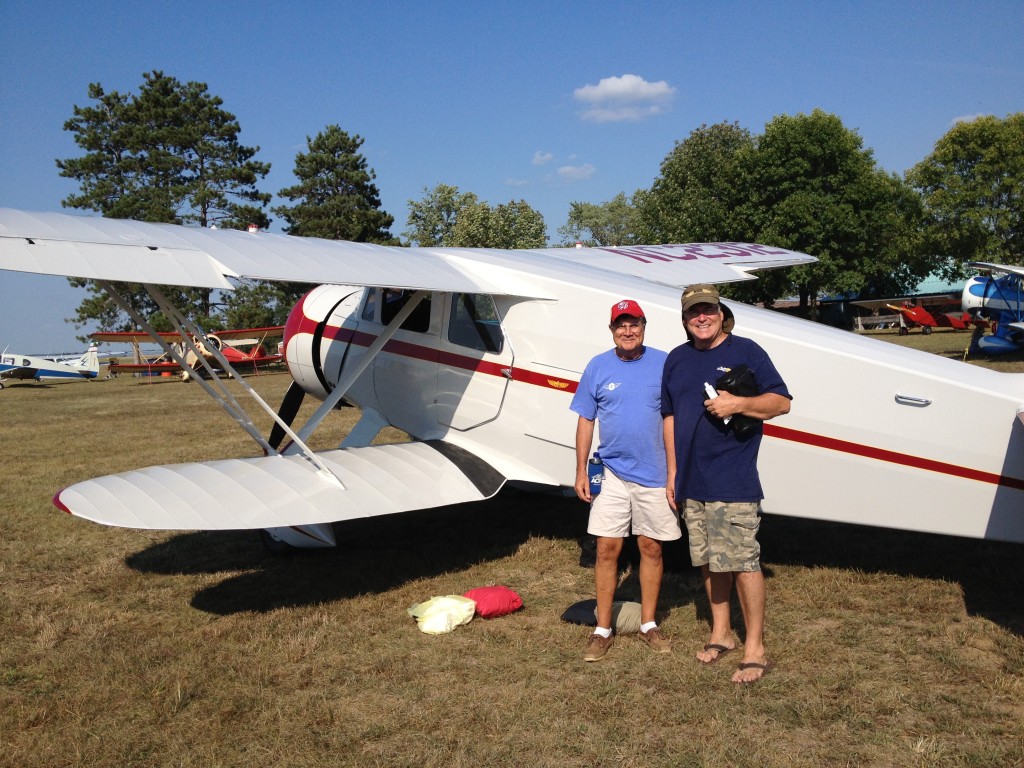 Maybe reversing the shrinking ranks of aviation, and reuniting it’s warring tribes, starts with admitting we all have been cannibals.  That we all have apologies to make, and letting go of our differences and to realize we have much more in common than we think.  We are a flying family, and we need to start acting like one. Perhaps all this mending we have to do begins with a simple, friendly wave?  What if the next time we fly anywhere, we wave at everyone we pass, and smile like Mike and Ed here?  Maybe that’s a good place to start, because the opposite of fear is love, and love would always wave.

“He who is different from me does not impoverish me – he enriches me. Our unity is constituted in something higher than ourselves – in Man… For no man seeks to hear his own echo, or to find his reflection in the glass.” ― Antoine de Saint-Exupéry