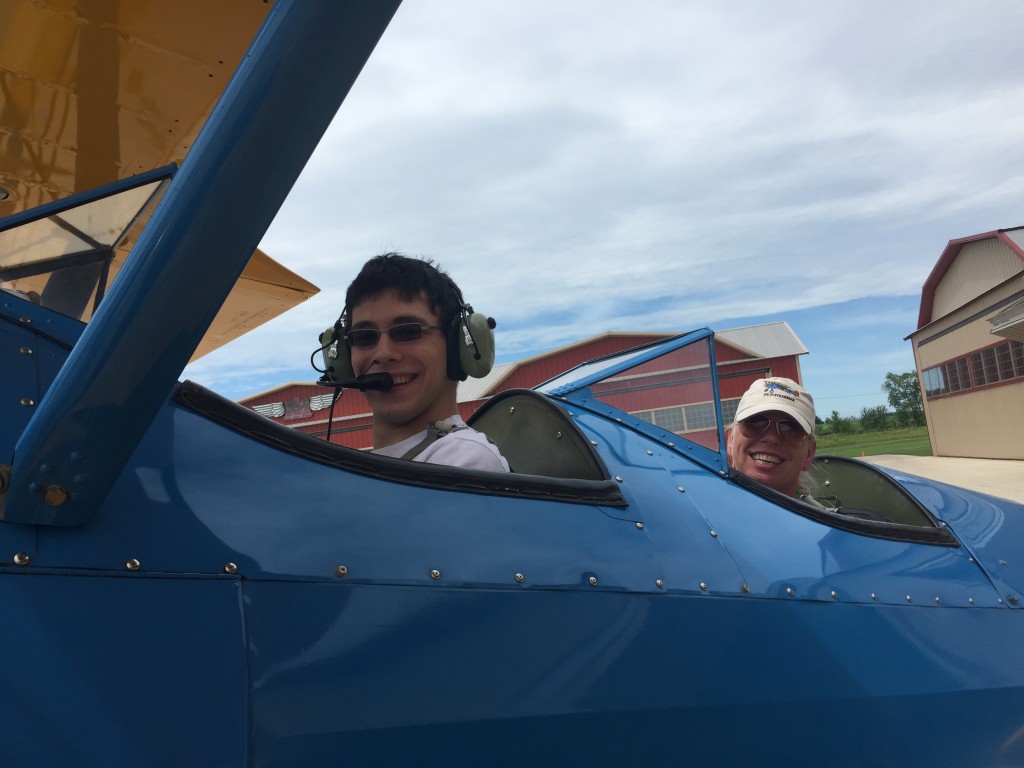 Schrödinger’s cat is standing by my wing.  Flips a challenge coin and says, “Call.”  Alive or dead.  I’m too smart to fall for that old cat trick.  Uncertainty is the only certainty a pilot knows.  I know what to pick.  Alive.  Don’t you know pilot’s never die?  We just go into a holding pattern in a different sky.  We have nine lives too, just like you. Now quit being such a scaredy-cat and get in my front seat.  I’ll take the very best care of you.  I know what you’re really afraid of young Schrödinger’s cat.  You’re afraid of being vulnerable.  Afraid to pop the top off the box and see what happens next.  I think we’re going to have a great flight.  Make up your mind.  I’m not going to offer again.  Don’t you know who the fuck I am?

Ethan was standing on the ramp as I taxied in with his Dad.  I was about to teach Ethan a lesson.  I spun the tail towards the hangar door and shut down the engine.  Ethan stood by my wing, stomped his foot, and threw his arms up in frustration. “I knew that was going to happen,” he said.  I knew it was going to happen too.  I had offered to fly with Ethan first but he said he didn’t want to.  Ethan is the teenage son of my good friend.  He is extremely smart, a computer wizard, and a deep thinker.  Ethan analyzes everything and is very uncomfortable with vulnerability.  He refused to fly because he had a bad experience with another pilot and was afraid to trust me.  I’m a hard-ass with people who say they don’t want to fly and then change their minds.  If Ethan would have been honest with me about the real reasons behind his refusing to fly, I would have treated him differently.  Worked through his fears with him.  Reassured him that I would never be unkind or do anything to scare him on our flight. I knew the storyline running through his adolescent mind.  We were going to be hijacked by cannibals, almost massacred on landing, and then carried off by Bigfoot riding on a giant painted fish into the woods of a mysterious island.  Not really, that’s me.  I like to make up stories in my mind.  Ethan’s reality was, he was simply afraid of what if?.

As Ethan’s Dad climbed off Blu’s wing I said quietly to him, “Doesn’t your son know who the fuck I am?”  That’s a joke between us.  It comes from an old Barnstorming buddy of mine that saw how some male pilot’s talked down to me.  Or ignored me, thinking I was just someone’s girlfriend and not an aircraft owner and a pilot too.  He’d watch my face glaze over as I sat listening to their stories of me, me, me.  Teasing me after they left by saying, “Don’t they know who the fuck you are?”  I know who I am so I don’t care what other people think but I wanted Ethan to understand something.  Something important he had to learn.

It is a privilege to fly, not a right, or an afterthought.  For every person I take flying another one will be denied.  Each flight is special and ephemeral, like each day of our lives.  You can never be sure what is going to happen next but you can’t let that stop you from experiencing life because of the fear of, ‘what if?’   What if you’re afraid?  What if you make a fool of yourself?  What if you fail, or what if you succeed?  What if all you had was today and you let it slip away?  It is very complex to teach the concept of time to someone who is young.  They don’t comprehend it until you end it.  I did that when I shut down the engine in front of Ethan.

Ethan was pouting.  His Dad and our friend Mirco were looking at me to see what I would do next. They know I’m tough on teenagers.  I sat in the seat and didn’t say a word, didn’t move.  Watching.  Mirco ran up to the side of my cockpit, promising that he had talked Ethan into flying and he really wanted to fly with me now.  I looked at Ethan and all I saw was a scared little boy standing in front of me.  Analyzing the infinite possibilities of what if?  A beautiful boy with so much so to give and so much life ahead of him.  I didn’t want him to grow up to be a scared man.  Stuck in a box waiting to decide how to live a life well lived. With no regrets.  I looked at Ethan and said, “Ethan I’m not trying to be a hard-ass but I need you to understand something.  It is a privilege to fly these planes.  It is a privilege to fly with me. It is a privilege to fly on this beautiful day and it will not be wasted. Not on my watch. Do you know how many people would love to fly with me today for free?  Thousands.  So I can’t fly with you unless you really want too.  If you really want to fly, I will start this engine again and you will have the time of your life.  I promise you’ll be safe with me but you need to decide.  Right here, right now, that you really want to fly or I’m putting Blu inside.”

Ethan replied, “I really want to fly!”  I flew with Schrödinger’s cat.  We had a great time and he came back feeling more alive than when he left.