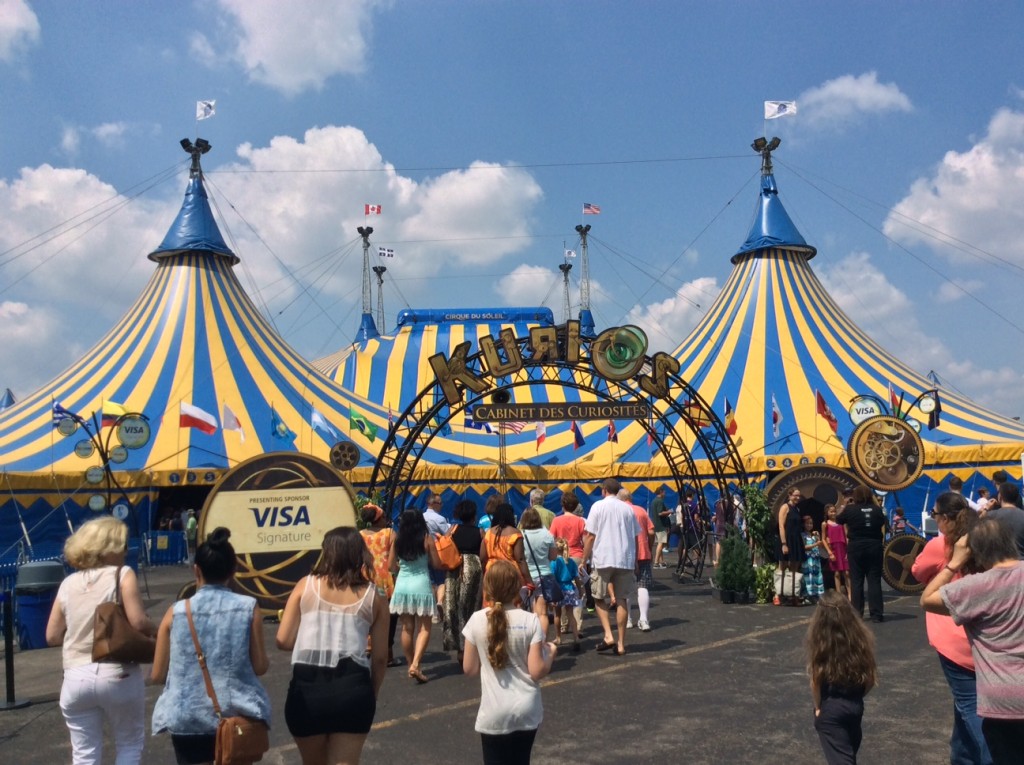 I sat on the grass and talked to Meis.  I asked Meis van der Rohe, “How could you do that, dear man?”  Build a fortress of black bars and glass, in such a beautiful space, along the curve of Lake Michigan.  Were your tower’s built to keep people out, or as a box to put them in?  You’re a genius, what were you thinking?  It was the day before my birthday and I wanted some time off to grow young again.   Unthink and pretend.  Watch the Air & Water Show by the lake and play with Cirque du Soleil.  Why did you have to take that away?  You took the present of the day and made it about the past.  The oak trees planted outside your twin tower’s are mulched in black.  The shade they provide is a shroud.  Two black towers wearing a mourning cloak from the morning of 911.  Meis your philosophy of ‘less it more’ doesn’t help me today.  More is more on birthday’s.  Have you met Antoni Gaudi? Have you’ve seen the La Sagrada Familia?  I have.  May I teach you something please?

There was a place where I learned to fly.  Not Traverse City, where I got my private pilot’s certificate, but Lakeland.  It was the place I learned to fly because it was where I taught other’s to do the same.  It wasn’t pretty or orderly or neat.  It was a hodgepodge of buildings that stretched lazily across the horizon, like they’re yawning.  Relaxed and welcoming.  Just as an airport should be.  There was a white tower there, with no gates or bars around it.  Twenty-one years ago, anyone could drive right in.  At the base of the tower was a restaurant named Tony’s.  A family run restaurant.  You could sit at a table by the window and watch the planes land.   To get into the tower, you just pressed the buzzer and said, “Hi. Can we come up for a visit?”  There was a man who worked there.  His name was Terry.  He was an architect too.  You would have liked him, everybody did.  You see Meis, Terry didn’t put people in boxes, like you want too.  Monolithic squares of black steel that you fit people inside and write off who you think they are.  His architecture was organic and gentle.  Free flowing and unfinished like Gaudi’s.  Terry was an architect of the sky and retired this year.  Terry taught me how to build people.

Terry never raised his voice or pounded his fist in the microphone.  If he was too busy, he’d ask pilot’s to wait politely outside the airspace until he had time for them.  Mostly I remember Terry as having empathy for everyone.  If he didn’t understand a request he’d just ask for clarification.  He had the coolest head and the warmest voice of any man I’ve every met.  His voice has always sounded like home to me.  Terry greeted me each flight with, “Good morning young lady.  Good afternoon young lady.  Good evening young lady.”  A combination of intimacy and respect.  Even in my fifties, Terry still said those kind word’s to me.   Lakeland Airport has changed since 911.  Like most of the airport’s in the country.  Fences and distrust and security have made fortresses out of them.  A knee-jerk reaction to someone else’s cruelty.  The future of anything should never be determined by the past.

Sitting in the shade of Meis van der Rohe’s twin towers, at the Air & Water Show, a voice behind me said, “Good morning young lady.  May I sit down?”  I looked up at the voice by the lake.  The man was dirty.  He looked tired and was wearing a Ghutrah.  I was alone and probably should of been afraid but I have always lacked stranger danger.  “Have a seat in the shade,”  I replied.  “They fenced it off here but they haven’t kicked me out yet.”  We didn’t say anything to each other, just sat and watched the airshow.  I knew my presence by him, a well-dressed white women, would keep the security guards from telling him to leave.  The AeroShell team started flying and the man in the grass said to me, “They’re really good aren’t they?  I always wanted to be a pilot”

“Yes, they are,” I replied.  their founder is an incredible pilot, Alan Henley.  He had a neck injury playing with his children.   He’s paralyzed from the chest down now.  Makes you appreciate each day doesn’t it?”

The man said nothing.  I got up to leave for Cirque du Soleil.  I had an extra ticket and I asked him if he would like to go with me. He just smiled shyly and looked down.  Ashamed.  I had gotten too close to a wound inside him he wasn’t ready for me to see.  I told him I’d talk to the security guard’s and tell them he was with me.

Driving back from Cirque du Soleil, after my day before my birthday adventure, I got my first Happy Birthday text message.  It was from Terry in the white tower.  “Happy Birthday Hon.  Hope you have a super day.  U deserve it.”  I rewrote the day in my head.  Meis van der Rohe’s dark tower’s were replaced by a sandcastle shaped like La Sagrada Familia.  Cirque du Soleil performed during the airshow for everyone on the beach as we sat on giant sea turtle’s.  The man in the Ghutrah was a wealthy United Airlines’ captain, earning the salary pilot’s use to make before 911.  Alan Henley flew lead pilot in the AeroShell performance and the Golden Knight, Corey Hood, was still alive to jump again.  Of course Terry was Airboss, keeping everyone safe.   Terry doesn’t know this but I keep a message in my phone, just to have his voice never erased from my memory.  It begins, “Good morning young lady.”  When I listen to it, that’s the age I’ll always be.