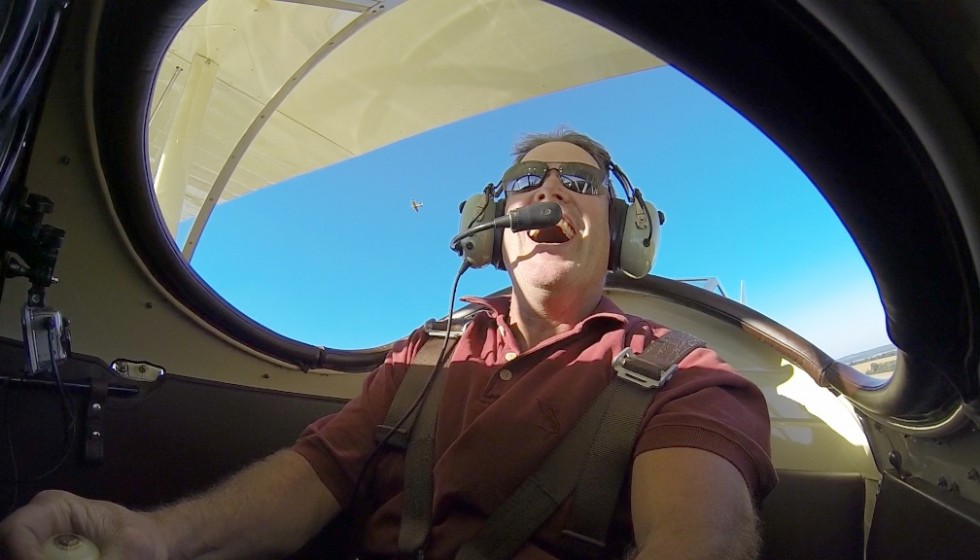 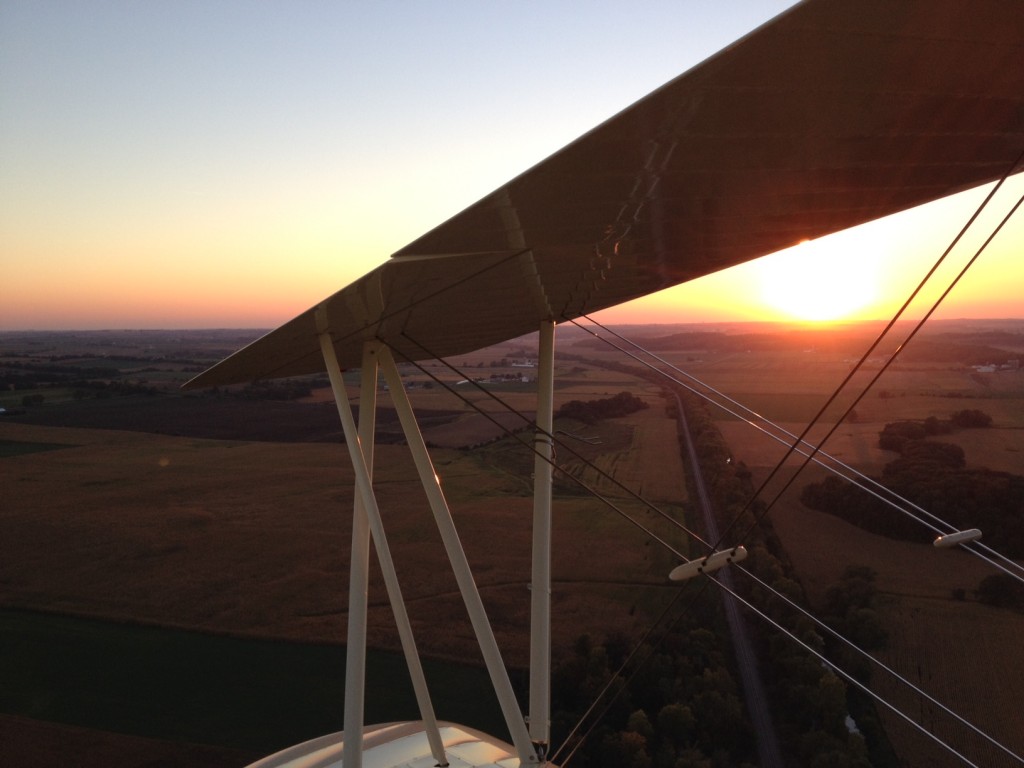 Somedays are the days I break people wide-open when I fly with them, and they actually glow.  They become human glow sticks so luminescent their eyes shine, and their emotion and thoughts become transparent braille, readable on the surface of their skin.  I know that they have broken wide-open when their shoulders relax and they become completely still on the flight controls, when they are wordless, when the tears come. Somedays flights are the special ones, these are the people I go out of my way to fly.  When they finally find me I see it in their eyes, and I hear it in their voices, that a flight to them means much more than just a flight in a rare biplane.  It’s an escape tunnel towards an air bridge, from the dark where they’ve been, into the light they’re trying to get back to.  Even sitting behind them, unable to see their faces, there is much being said between us without words. I know the escape route by heart. Their escape begins the moment I move my hands away from the stick up towards my windshield, and when my feet shift down off the rudder pedals to the floorboards and I say, “you’re flying the airplane.” The door to the tunnel opens, when I give up my powerful to their mend their powerless, when I give up my trust fly to break their trust fall.  I put their life back in their hands along with mine, the moment I stop holding their hand, and I let go.  In that fearful moment, when they first have to make all their own decisions in my big, blind biplane, they start into flow, and just fly.  They forget about me and themselves and where they’ve been, and they start down the tunnel. When I see them ahead of me, flying towards the light at the end and not looking back, that’s when I know they’ve escaped. I don’t see them again until after we land and I look into their eyes, I see that they’ve changed.  Their eyes are glowing back at me, like tapetum lucidum.

Tapetum lucidum, meaning “bright tapestry,” is the glow that animals exhibit when a bright light is shone into their eyes at night. The iridescent quality of their eyes is due to a mirror like membrane at the back of their eye called the tapetum lucidum.  When light enters the eye, it passes to the retina and is reflected from the cells, sending it back to the retina, where it provides double the light as would normally be available.  It allows animals to navigate at night with low light sources, such as the moon and the stars.  So that they can remain hidden in the darkness and survive, hunting for food or shelter.  Humans, and most primates, lack a tapetum lucidum.  Yet I meet people who’s eyes glow, and I feel that their eye shine is a refection of grieving.  They’re afraid of the dark, just like me, and because of that fear they have chosen to become softer and more vulnerable.  Breaking open, instead of just breaking and closing up.  I saw that glow when I flew with Jamie and Lu Ann. 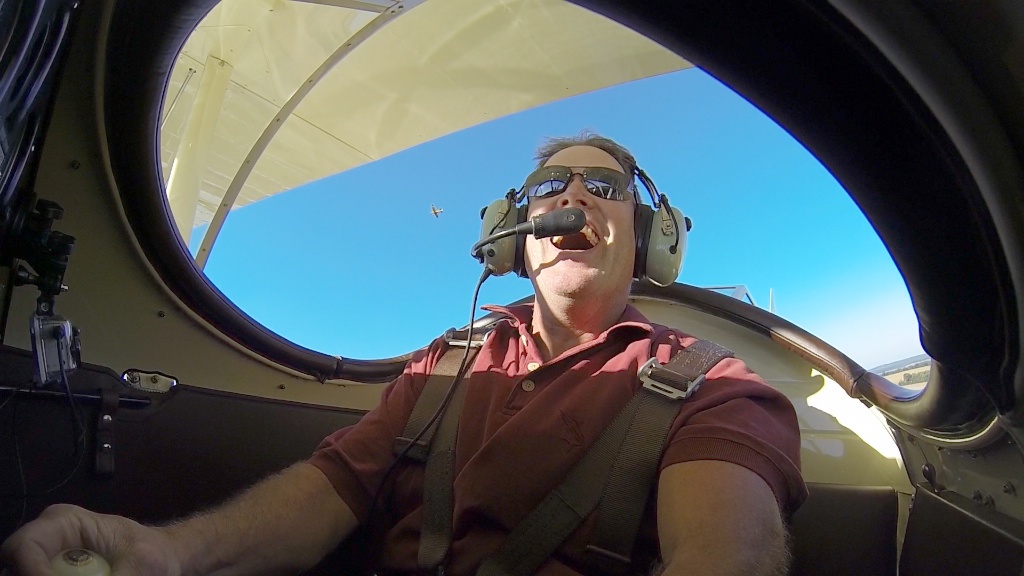 They both were special, one I knew had had a great loss, the other, I simply felt a certain sadness from. I didn’t want to fly them because I sympathized with them, I wanted to fly with them because I empathized with them. The ability to empathize with someone, to see things from their perspective and accept it as if it were your own, is the most important gift a teacher can have.  It is also the greatest gift we can give to one another.  I knew that I could get them on the air bridge, reconnecting them to remembering what it was like to feel fearless and full of joy, if I could give them the perfect flight.

I had flown Jamie briefly before, but it was far from a perfect flight.  Buddy knew it, he told me we shouldn’t fly that day.  It was gloomy and cold, kind of a harsh day. He told me by not starting his engine, and Buddy always starts.  Once he finally gave up trying to tell me not to fly, he started up.  On take off I asked Jamie, who is a new tailwheel trained pilot, to be “a little lighter” on the rudder so I could feel my inputs alone.  Buddy’s nose was weather veining to the right, and I knew something wasn’t right. We were on a paved runway and putting back down at that speed was not a safe option. Safety for me is always in the air, and I would have time to figure it out, what was wrong, in Up. I listened to my plane while Jamie flew, then I took the controls as I suspected that something in my rudder cable mechanism had jammed.  We talked it over and we discussed what was wrong with our plane, and how we would handle it together. I told Jamie that we would go back to Hartford, and if the wind was straight down the runway I’d land there. But if there was even the slightest right cross-wind, he was going to get to fly all afternoon until we found the perfect grass runway, into the wind.  As we approached Hartford airport, the crosswind disappeared, and we did a lovely landing in the grass on the north side of the runway.  Thinking about it now, maybe it wasn’t a mistake, and it was the perfect flight for Jamie.  I believe that my talking with him as a copilot and including him in the decision process, fired his mirror neurons.  It became his decision process as well, his safe landing, because Jamie’s eyes were glowing with confidence after we shut down, and he wanted to fly again. 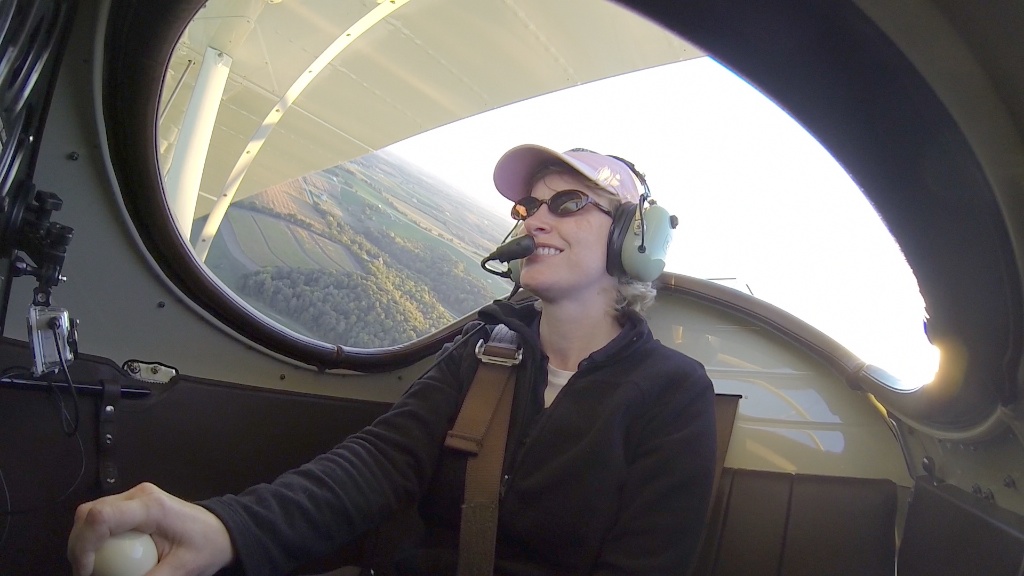 A few days later I did give Jamie and Lu Ann their perfect flights, and they gave me mine. On a cloudless evening with chiffon air, they both flew off the grass runway at Brodhead, WI.  Jamie flew first with me, then with my barnstormer friend Upside-down Brownell, where he got the chance to do loops and rolls and hammerheads, in Josh’s beautiful Waco.  Lu Ann’s turn was next, and her hands were shaking when she got into my plane.  She was quivering, Lu Ann admitted to me she had a huge crush on Buddy, and was blushing.  Within the first five minutes she was on the controls alone, and I watched as she made her headlong dash down the tunnel.  She hit the air bridge when I couldn’t get her to stop chasing the river, doing lazy eights, and turn back to the airport.  After our flight we hugged each other in silence, then she laid her head on Buddy’s cowling, and she glowed. Lu Ann wrote me later that her new nickname was Fearless Fifi, but I already knew that.

The thing is my friends…things that get used, that get run, that move, that start, that breath, that live and fly – they break.  Everything breaks and everyone breaks.  No matter how much care, love, or maintenance you give, everything will eventually wear out and break. It’s part of the lifecycle.  The measure of living your life courageously, deeply, artfully, is accepting and embracing the fact that we are all vulnerable, and just because we break doesn’t mean we’re broken.  Newton’s third law says, “Forces always come in pairs – equal and opposite action-reaction force pairs,” so breaking is the equal and opposite action-reaction of mending. They’re a pair just like us. When you see someone who is hurting, help them.  Don’t look away, look into them.  When you do, their eyes will shine back at you like tapetum lucidum, and you will become their mirror, and glow.