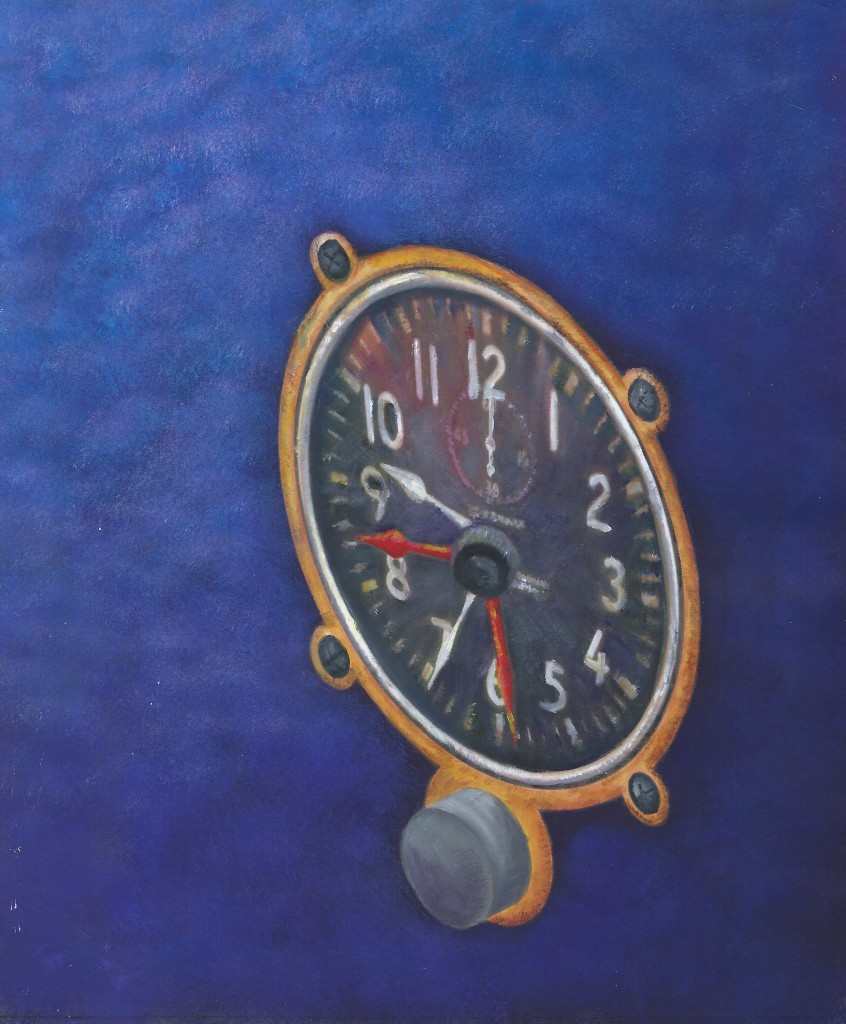 A clocca is a clock.  A clock is a bell.  A bell marks a watch.  From the tower each hour, the Watchman calls, “All’s well.”   Wæccende, Boatman, remain awake.  Ships watch changes four quarters a day.  Thirty minutes, turn the double bubble upside down.  Second Dog Watch finished.  Eight bells and all is well.  First Watch has begun.  Not till the pendulum swing, did a second make the face.  Chronostasis took place.  Men put time in their pockets, chained to their vests. Shackled time to their wrist.  Wound themselves up by the crown with their free hand.  No longer Watchman standing watch.  They were just men, watching a clock.

I grew up in a house full of clocks. They all chimed at different times.  An 1820 Scottish longcase was the most emergent.  It’s loud quarter hour chimes, overpowered the petite floor clock painted with me and our Newfoundland on its face. The Cuckoo clock in the kitchen rang in when the Glockenspiel remembered to open the door.  The fancy French wall clock was wound daily, but snubbed time regularly.  The brown victorian clock of no origin, nagged at time from the top of the stairs.  The Wilson family clock did not work, just presided over our history.  Silently guarding the mantel and the hearth.  Every hour was a strange ticktocking, chiming in, all at different timing.  I own one clock, and it can be found in the left hand corner of Buddy’s panel.  A 1929 Pioneer Eight Day clock. It’s very rare and I spent years finding the exact one original to my plane.  I am fascinated with that clock.  It runs well but I never wind it.  When I fly, I just move the set of red hands to mark the time I start the engine.  That is the time my watch begins, and I become the Watchman who doesn’t wear a watch.

When I flew for commercial operators, flight was all about time.  Time out. Time off. Time on. Time in.  On schedule.  Behind schedule.  Ahead of schedule.  The measure of a flight was measured by time.  Flying the old planes is different.  You get there when you get there but you get there all the same.  The only presence of time in my cockpit is the red hands marking the start of the engine, and the fuel gauge telling me how long until I land.  There is a timelessness in this type of flying that is a tonic for people in a time obsessed society.  When I sold 30 minute flights, the only question I got about time was, “How much time do we have left?”  A question asked by my flier because they didn’t want the flight to end.  My flights aways ran over, at least 5 minutes.  I had so many hours of Stearman time by then, I felt I could share some extra time with them.  When we returned to the airport the pilots would run to get their logbook, or put the card with their flight time and my CFI signature in their wallets.  Tucked away for safe keeping until they could recount  it into their flight ledgers.  If time is money, then flight time is a gold standard.   A zeitgeber, “time-giver.”  I find it fascinating when I meet a flier, the qualifier they most often define themselves by is flight time.  How many flight hours they have, how long it’s been since they flew last, or how old they were when they started to fly.  Timing their timelines by tenths, spent in, or away from the sky.

I am enjoying being on Sarah time.  Living on the circadian clock of the islands and the lake. There are no working clocks in my cottage this summer, the only sign of time are the bells.  Westminster chimes; singing the song of St. Mary the Great and the Pugilist’s Tower across the lake.  I found myself looking forward to hearing the bells.  Waiting for them.  Then noticing their absence and wondering when they would ring again?  The bells echoing across the water were beautiful, but they were inconsistent.  Some half-hours they didn’t ring at all.  Some times they played a song.  When they chimed the time, they began on the 9’s instead of the 0’s. I began timing the bells to the atomic clock on my computer and trying to find a pattern. Was I in an acoustic shadow?   I like playing connect the dots.    Time to find the source.  I followed the sound of the carillon to the Community Church in town.  A pretty little church on a hill above the lake.  I didn’t see a bell tower.  I asked the Secretary about the church bells.  She didn’t know when they set the bells, or why they played what they did.  She did ask me,  “You do know they are electronic?”  No I did not, but I found it very ironic.  I had become a Kettle and Nob.   A Kettle is Cockney slang for a watch, its origin coming from the phrase, “A watched kettle never boils.”  The bells chimed in their own time, on their own clock.  But they did chime each day, all the same, and it was a joyful noise.  Maybe the seconds they’re early, or late, is extra time we can share on the lake.

Every pilot I’ve ever met, certificated or not, looks up each time a plane fly’s by.  The atomic clock stops for them when they hear the sound of an airplane engine.  They stop what they’re doing and watch that plane fly.  Watchman still, standing watch.  The sound of a plane, like a bell.  Reminding, Wæccende.  I am here.  All’s well.

Happy Fathers Day to all the Watchman.  Dad’s standing watch, guarding the mantel and the hearth.