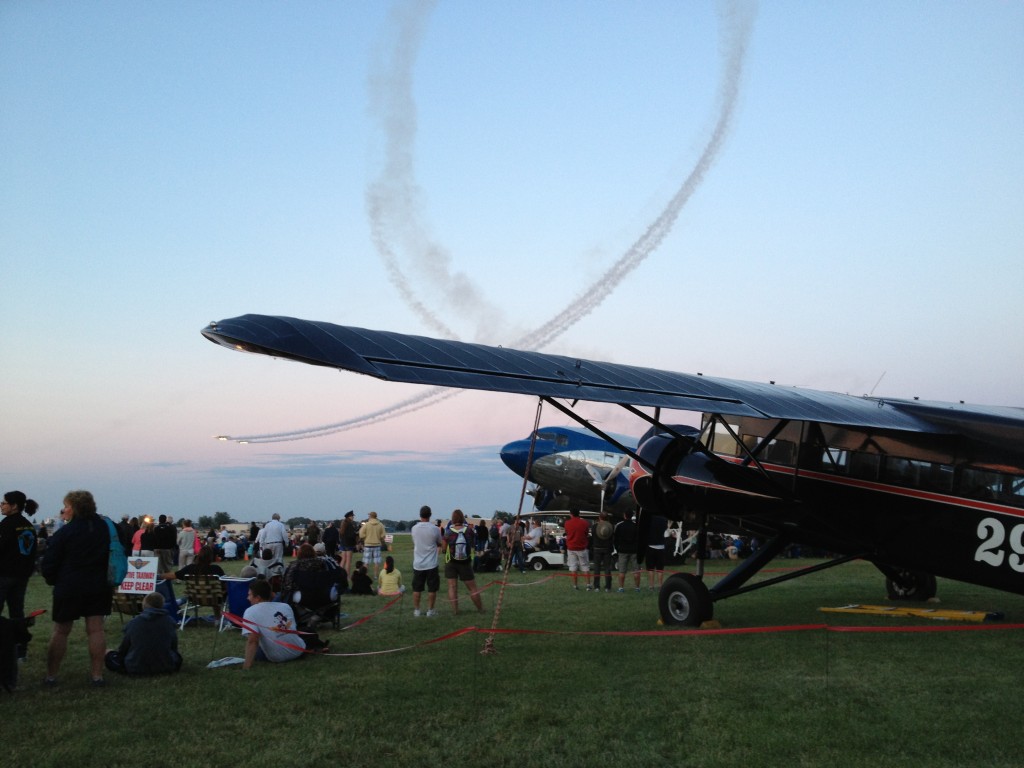 Watching the night airshow at AirVenture this year my eyes lit up with the ballet of incandescent winged things, trailing sparkles and smoke through layers of blue twilight.  The  airshow performers were perfect dancing spectacles of glowing grace, twirling and hurling in cloudless skies.  They twinkled at us from a vertical stage that stretched forever, like lightning bugs captured briefly in a glass sky box on our night stand.  It was theater of the air, but a tragic comedy to listen to.  The music scoring most of the acts was so bad I wanted silence. If I couldn’t have dreamy silence, then at least a little night music that matched the airplanes movements, to make me feel as deeply as I was seeing.

Maybe it’s my degree in theater, or the years working in arts marketing and promotions that makes me amazed, and saddened, by the unimaginative staging of airshows.  AirVenture was the first airshow I ever saw.  I remember watching it a decade ago and being quickly bored with the whining and droning of the engines, and performers zooming endlessly up and down without a storyline, or even a relevant musical score.  That afternoon I was ready to walk away when the air exploded with bass and fire and smoke, and the mesmerizing chaos of the Master’s of Disaster pounded my ears and eyes and drew me back in.  Finally a real show, one that raised the hair on my arms and imprinted itself in all my senses.  I still remember what the air smelled like and how their music made me feel watching them for the first time. I’ve always believed music leaves permanent tattoos on our lives. 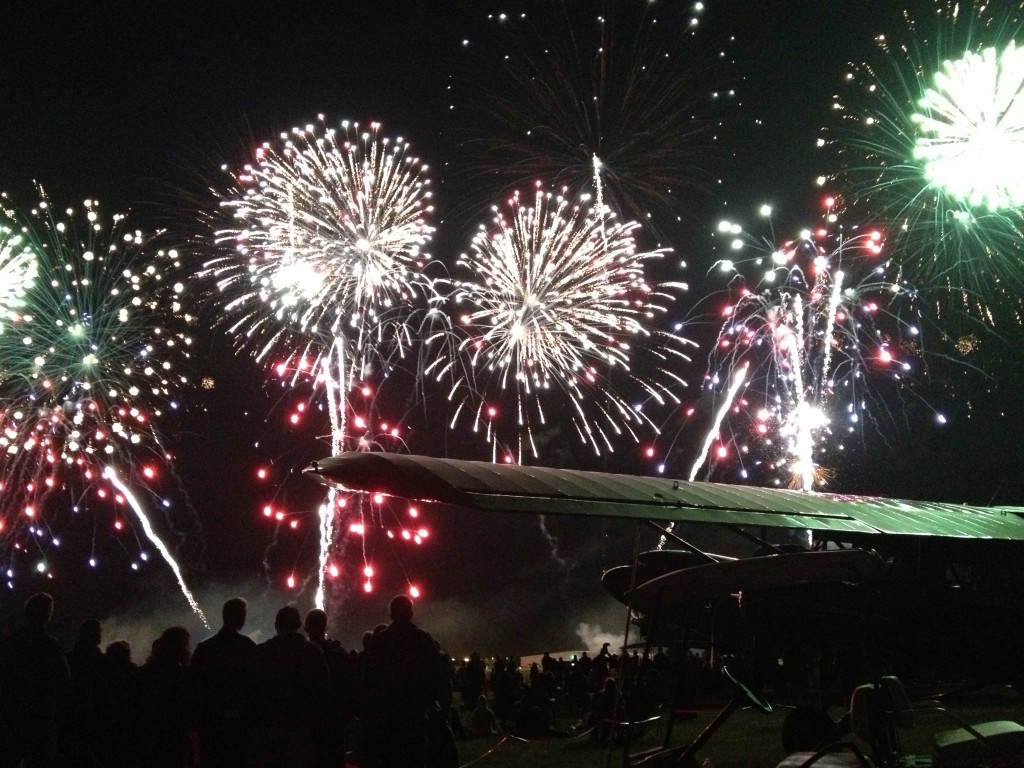 Lately I’ve heard way too much Lee Greenwood and 1940s music.  During the week at AirVenture I was surrounded by lyrical accents of people from all over the globe.  I was embarrassed that the best welcome we could give them, to the biggest aviation celebration on the planet, was playing, “I’m proud to be an American,”  again and again.  Looking around me during each airshow I saw a sea of young faces, yet all I heard was old men’s voices and old men’s music on the PA.  Where was the rock, the pop, the hip hop – this generation’s music?  I asked the Presten boys, both in their teens, about the music and announcers during the airshow, did they like it?  Both replied, “No, it totally sucks.”  How could the show producers not understand the power of music to influence, and drive a future generation of loyal brand fanatics?  How could they not understand the capacity music has to imprint on our right side brain?  Music defines generations, it scores all of our lives, and every young person there lost the opportunity to have that airshow permanently tattooed in their memory.  The Presten boys, and all the other teenagers at AirVenture, just watched an airshow, when they deserved to feel an airshow.  And all the adults making the decision to play their decades old music, lost an opportunity to make a memory for every young person there.  That’s pretty selfish, adults already have so many song memories of our own. 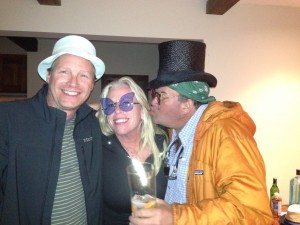 A few weeks after AirVenture, I sat on Andy’s back deck in Steamboat Springs, CO.  It’s the same deck that has been the stage for decades of lawn parties, sun parties, and snow parties, each one scored to our music.  It was a half-an-hour before midnight and I was hiding.  I’ve started playing a strange game with my songs from iTunes.  I select “purchased” from my playlist and hit shuffle, then see what comes next.  What came next out of my iPhone, was a song by Train – a sticky, beautiful, tragic song for me.  It took me immediately back, almost four Novembers, to when I first heard it.  It had been so hopeful for me then, now it was just hopeless, the only song in my personal songbook that was painful for me to hear. I thought I had deleted it.  But there it was, first out of the box, scoring my night like the hundreds of other songs in my life.  I knew all the time, speed, and distance in the world would never erase the memory of that song, or any of my life’s songs.  Just then my phone lit up with a text from Daniel, known to us simply as “D.”  He had noticed my disappearance from the house party, raging full force downstairs, and was checking in.  D texted me, “hi from the floor below. love my hat. glad we are here with you.”  Sweet Daniel to the rescue.  I texted him, “back deck join me.”  D sat with me in the moonlight and we talked, mostly about starting our own businesses, and taking bold adventures at a stage in our lives when most of our friends were winding their adventures down.  Just before midnight, we stood up to rejoin the party downstairs and I hit shuffle on my iPhone, one more time.  Steve Winwood came next, and I smiled.  It took me immediately back to my first real job after college, at a summer stock theater in Traverse City doing their PR.  For just a few moments I was flying down M22 in my 1984 Mazda, with the sunroof open and singing along to Back in the High Life, racing to Leland after work to make the sunset on Lake Michigan.  I said to D, “Perfect, let’s go drink some champagne!”

It’s these life songs, these icky, sticky, painfully beautiful, permanent musical tattoo’s, both good and bad, that keep track of where we’ve been – even when sometimes we would rather forget.  They remind us that we should be the only ones who get to score our lives.