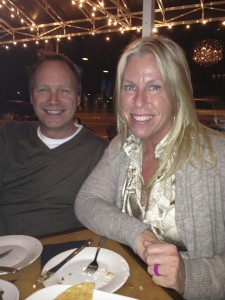 At some point, we can all decide which parts of our history to record, and which parts we want to rewrite. 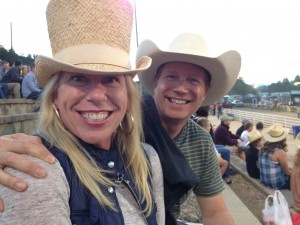 I will be fifty years old next Saturday, and we are flocking west on the B-29 tour.  Further west than I have ever flown, to Denver, Colorado, landing  at Rocky Mountain Metro two days before my birthday.  Denver is home to me, because it is the home of my oldest and dearest friend, Andy.  Andy has been my constant companion for thirty-five years.  His mother and my mother were childhood friends, so he and I grew up just down the road from each other, in polar opposite households.  Though our houses where completely different, we are exactly alike. So much so, we finish each other’s thoughts, and talk over one another in a silly, secret shared language of coded words and show tunes. I always wanted to trade my small, safe, watchful family for his big, wild, unsupervised one.  I suppose Andy wanted to trade his for mine as well.  When I would complain about my parents constant monitoring of my whereabouts, he would remind me how lucky I was to have someone actually care where I was.  It’s taken me thirty-five years to realize he was right, now I’m proud of being loved by so many people, and being expected to check in. It is a privilege, not an imposition, and this summer I’ve all but lost my longing to disappear

The last time I flew in Denver was over a decade ago, in a rented Piper Seminole, to get recurrent as a Flight Instructor at Centennial Airport so I could return to flying again. Two years earlier I had thrown my beeper in the Gulf of Mexico, and resigned from my LearJet job on the West coast of Florida.   I was sick and tired of hauling owners bags, and their ego’s, to vacation destinations across the country.  The rewards I had found being called “Lifeguard,” flying air ambulance, I had lost when I took a pilot job with a jet management firm.  I found myself just automating a swept wing limo, not flying anything.   I was burnt out on commercial aviation and everything else – I couldn’t get out of Florida fast enough.  After a semester in graduate school at the Savannah College of Art and Design, I was awarded a scholarship to a design program in Denver.  It was a perfect escape to somewhere safe…safe for me was Andy and Denver.

I remember sitting in the right seat of the Seminole that morning, with my right arm so numb I could barely hold the yolk.  Soon after I had arrived in Denver, I found myself waking up with my lower arm almost paralyzed each morning.  Andy took me to one of the clinics he managed to see his boss, a physical therapist named Jo.  She told me that I didn’t have a physical injury, but that I was clenching my right hand so tight at night, making a fist with such strength, I was actually paralyzing my own arm by morning.  She was right, I was fighting back in my sleep, something I couldn’t do by day.  The main reason I left Florida was because when I ended a relationship with a long time boyfriend, his response to my leaving was to threaten to kill me.  It was the first time in my life I knew fear, real fear.  I’ve always lacked “stranger danger,” so the idea that someone who I had loved, and who loved me, would actually want to hurt me was devastating.  I blamed myself for choosing so badly, and kept it a secret from everyone but my immediate family.  I came home from visiting the physical therapist that night to Andy’s house, and we sat in his basement, watching the Simpsons, and I finally told him my secret.  My secret was that I was scared to death and being threatened.  Then, as he had done my whole life, Andy’s response was to make me laugh.  He told me, “Oh honey, you’re a huge mess. This guy is a bully and we aren’t afraid of bullies.  We’ll get that arm fixed tomorrow, now let’s have a cock.”  (That’s code for cocktail.)  Andy fixed me and my arm within a month.  He made a plaster cast of my open hand, so I couldn’t make a fist, and wrapped it in an ace bandage.  Then locked my doors and checked in with me each night until the nightmares were less.  He found me a Shrinkyboo (That’s code for psychologist) to talk to, who reaffirmed that this guy was just a jerk and a bully, and that I was going to be fine once I learned how to develop a little “stranger danger.”  I got a good resume and I was hired at Fantasy of Flight, and eventually moved back to Florida to fly again.  I left Denver not completely healed, that would take years, but I had a really strong bandage.

So it’s fitting that this year I return to Denver.  I find the closer I get to the mountains and the closer I get to fifty, the closer I get to being fearless.  To me being fearless means letting go of the death grip on certainty and safety nets, and just free-falling, head first into some magical unknown.  Believing I’ll not only survive it, but thrive in it, wherever “it” is.  You have to really know fear to believe you can become fearless.  People ask me, “Aren’t you afraid of flying by yourself?”  No, I was afraid of not being alive, to fly by myself.  People ask me, “Aren’t you afraid of test flying your brand new Speedmail?”  No, I was afraid of a message on my answering machine, from the man who threatened me.  I didn’t recognize the phone number, so I googled it, and the call was from an office at the FAA.  It wasn’t lost on me that he had called from his office at the FAA, so I would know that he could track me, “flight follow” me throughout my life, and threaten what I loved most, being a pilot.  When I heard his message, I threw my answering machine in the trash, along with all my home phones, and repeated Andy’s words, “We aren’t afraid of bullies!”

The icing on my cake this birthday year is I’m playing make-believe  in a graphic novel for my new Jimmie Allen Flying Club, with the most creative group of people I’ve ever had the pleasure of working with.  I have none of the qualifiers most women use to measure their lives by this age, and no safety nets.  I have no husband, no children, no house, and not even a date for my birthday dinner.  To make it all the more crazy-perfect, I have absolutely no idea what the future will bring and I should be scared to death…but I am having the time of my life!  I am free-falling fearlessly into tomorrow, by savoring every minute of today.  Especially happy that my phone blows up each night with people who love me and are waiting for me to check in that I am somewhere safe, after a beautiful flight from nowhere.