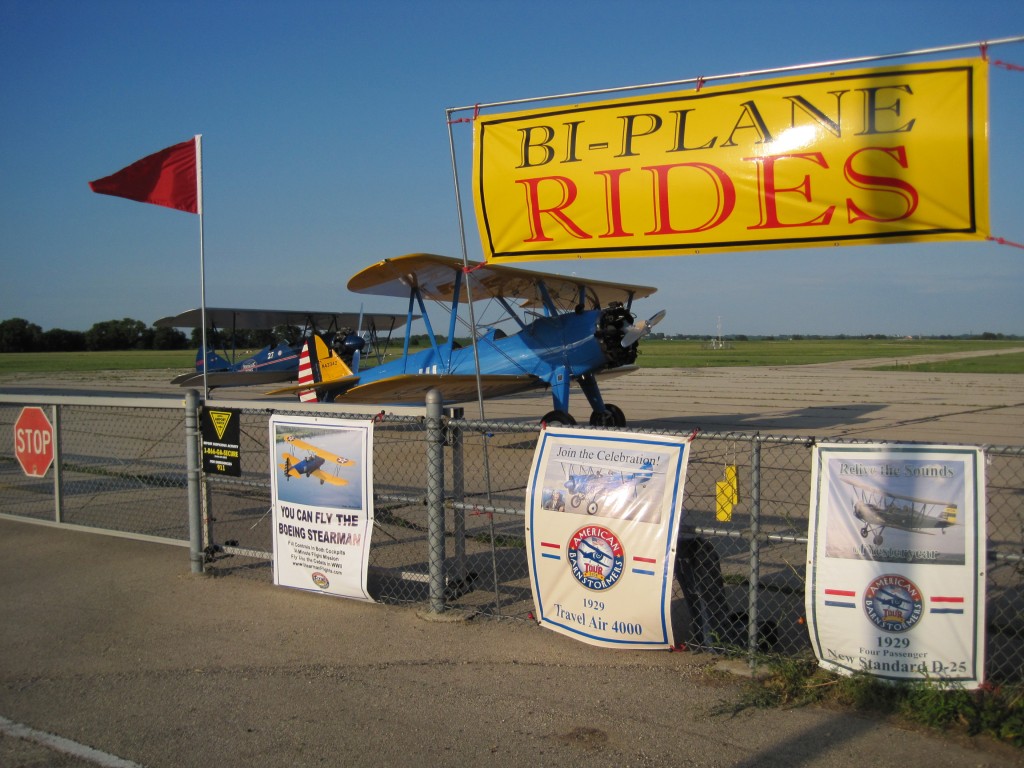 I have this plane because of you.  I saw you standing at the airport fence, a Faraday Cage I couldn’t recognize you through.  It had been so long since I had seen you.  Seems like a thousand years ago.  You recognized me first, or at least you thought you did.  I couldn’t see your eyes behind your sunglasses.  You stood at the fence watching me.  You wanted to fly but just wanted to be sure it was me.  Make up your mind watchman.  Are you going to fly or not?  My schedule is already loading up and I won’t get out of the the seat until lunch.  I have all the time in the world and nowhere else to go.  Our signs are on the fence at the Freeport Fair this weekend.  Biplane Rides.  We can’t leave until everyone who wants to, fly’s.  You turned and walked away.  I knew you from somewhere but where?  You came back with two men.  You left them at the ride booth and waited until they unloaded my front seat flier.  You walked up to the side of Blu and smiled at me.  I smiled back.  I still didn’t recognize you.  You lifted your sunglasses and said, “Brigadoon.”  It was Danny.

Danny was a legend.  A boat captain, former military special-ops, larger than life man, and incredibly handsome.  He was so handsome it was hard to look at him.  Danny had girls in every port, friends at every pub, and a dock waiting for him in every marina along the Intracoastal Waterway.  I met Danny in Hoboken, at least I think it was Hoboken.  It’s hard to remember, it feels like a lifetime ago.  I was married then and my husband was a boat captain too.  We were returning to Lake Michigan from having spent a year on our Island Gypsy trawler named Brigadoon.  Danny was delivering a motor yacht to Lake Michigan and tied up for the night next to us in the marina.  He knocked on the side of Brigadoon’s hull and asked for permission to board.  Danny said he knew a local dive named Arthur’s that had the best steaks in town.  Would we like to come to dinner with him?  We became old friends in one night.  We traveled up the Hudson River and through the Erie Canal in tandem.  He knew all the best harbors and bars, and everyone knew Danny.  He drank Dark and Stormy’s, Goslings Black Seal rum and ginger beer.  Every bar we walked into already had his drink made, and waiting for him, by the time we sat on the stools.  I knew Danny for years and looked up to him, even though he was younger than me.  After I took my first discovery flight, on my 30th birthday, I drove to Charlevoix to have dinner with my husband and Danny.  We sat at the bar drinking Dark and Stormy’s.   While my husband didn’t think much about me wanting to be a pilot, Danny did.  He encouraged me to go for it.  Offered to introduce me to the wealthy yacht owners he knew, who had their own jets once I got my commercial certificate.  When I divorced I jumped ship literally.  I loaded my clothes in my car and moved to Florida to get my ratings.  I never looked back and I never saw Danny after that.

I’ve lost entire periods of my life in a blur of sensory sound bites.  Memories of living on boats and then learning to fly, overlap randomly in the archives of me.  The crash of plates, breaking in the galley, almost broaching in the swells off Cape May.  The squeal of tires, almost crash landing the flight school’s C-150, on my first solo cross-country.  The smell of diesel exhaust in the Waterford Flight of Locks.  The smell of my first log book.  The feel of morning mist, raising goosebumps on my skin, as we rounded the Citadel on the Hudson River.  The feel of sweat running down my back, sticking to my seat, on my private checkride.  Seeing Danny standing beside Blu at the Freeport Fair, was like entering a time machine.  The past and the present colliding in one man.  Danny’s friends flew with me first, then he hopped in my front seat.  We had so much catching up to do.  As we flew I felt the fizz of ginger beer in my nose and the wooden bar stools the night after my first flight.  My lost memories were catching up with me. It seemed like a lifetime ago and felt like yesterday.

Danny flew us over his land as he talked about his life and his new business.  He had a wife, a family, and a farm.  Danny was softer than I remembered him.  A rounder frame surrounded the chiseled warrior now.  He was a happy Dad and it made him handsomer than he had been.  In a gentle way.  It was easy to look at him now.  On the flight Danny looked up in the mirror at me and said the kindest thing. “ We all missed you and wondered what happened to you after you left.  Everybody knew what he did to you.”  Nothing to say but, “Thank you.”  Danny was the only one who encouraged me to fly.  No one was at the airport waiting for me to land on October, 29th when I got my private pilot certificate.  I don’t even have a picture from that day, just a logbook entry.  Nice to hear but it didn’t matter.  I couldn’t remember most of it anyway, except for the surreal sensory memories of another lifetime ago.  Brigadoon disappeared in the mist.

I am horrible at record keeping and remembering dates, so I try to record things in my computer calendar to remind me of important events.  Blu was delivered from Texas to Poplar Grove last Friday evening.  Just before a summer storm hit hard.  I opened my calendar to July 17th to record Blu’s Homecoming.  There were three events already there.  They read: Pete Birthday, Danny Freeport Fair, and Goodfellow.  The first one I already knew.  July 17th is my brother Peter’s birthday.  It’s easy to remember as we share the same birth day, just one month apart.  Mine’s August 17th.  The second event was a complete surprise.  I didn’t remember when I flew Danny at the Freeport Fair but there it was.  July 17, 2010.  I picked up my phone and saw I still had Danny’s number and called him.  I said, “Hey Danny it’s Sarah, the Stearman pilot.  Through a strange series of coincidences I just got my PT-17 back last Friday.  I want to start a program donating “Buddy Flights” to veterans.  Could you help me?”  He said he’d be happy to help the flying Skittle pilot.  Danny called me the flying Skittle pilot because when I flew his enchanting daughter, she renamed sweet Blu after her favorite candy, Skittles.  Danny and his wife had their own foundation, helping veteran’s families, and they knew a lot of resources for me.  The third event for July 17th, Goodfellow, was a mystery.  I knew Blu had been based at Goodfellow Field, TX in WWII.  You can send the bureau number of your military airplane to the Smithsonian and they will send you the history.  If you don’t know it you can give them your civilian number and they’ll find it.  Blu’s numbers’ were on my computer.  Military  #42-17836 and civilian #75-5999.  But why did I write Goodfellow on the 17th?  Or did I?  I honestly can’t remember.  As if my life could get any weirder?  I googled Goodfellow Field and their Home Page flashed, 17th Training Wing on the screen, again and again.  I went to their history page and read Goodfellow Field was established on August 17, 1940, and the first classes of students arrived on June 11, 1941.  June 11th was the day I picked up Blu in 2005 and the day I called Robbie Vajdos, in 2015, telling him to get me Blu back at any cost.  Ok, my life just got weirder.  I get it God, it’s crazy but I get it.  I think I just got back a Time Machine.  I better buckle up.  It’s going to be a wild ride.