Who is Jimmie Allen? 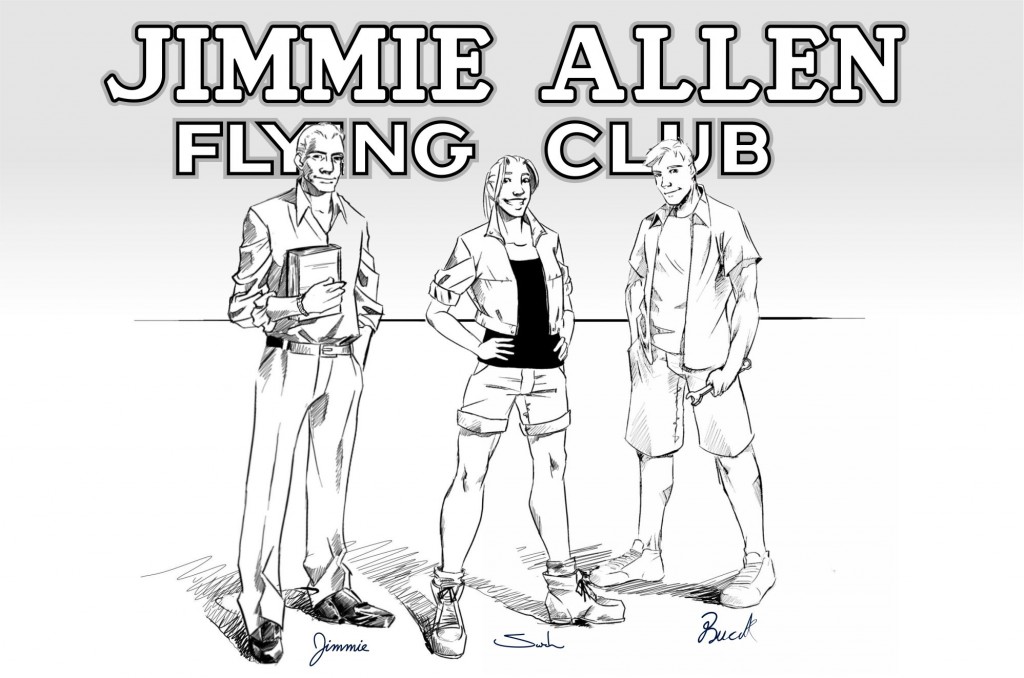 Has anyone seen Jimmie Allen?  I’ve been looking all over for him.  I stood in Russia with the Night Witches and pointed at his picture. “Do you recognize him?”  All they said was, “Nyet.”  I flew to Egypt to ask Count Almásy.  “Have you seen Jimmie Allen?” László replied, “He doesn’t exist my dear, but I’m not really a Count either.”  I flew to Rome to ask Balbo.  He said, “Scusa, no.”  I flew to Africa to ask Beryl Markham, “Have you seen Jimmie Allen?”   She said, “No, but come back when you find him.”  I hopped a boat to Hammondsport to ask Glenn Curtiss and then motored down the Hudson to Old Rhinebeck to see Cole.  They said, “No one has seen Jimmie Allen but we’ve been waiting for him to show.”  I stayed up all night waiting for Saint-Exupéry to fly over me in the Strait of Gibraltar.  Yelled up to him from my deck chair.  “Have you seen Jimmie St. Ex?”  He said, “Non, ma fille douce. Bonne nuit.”  I stopped Mermoz in Barcelona as he was leaving for Alicante.  Jean had never heard of him.  I went to the Mall at Roosevelt Field and I ran into Anne and Slim shopping incognito.  The Lindbergh’s said, “No joy, but we know he’s out there somewhere.”

I’ve spent years trying to figure out who Jimmie Allen is.  Looking at hundreds of pictures and digging through archives.  Sitting in his Speedmail, wondering about him.  Jimmie’s names’ on Buddy, not mine.  I like to pretend, so I made up Jimmie Allen for the comic we were working on in 2012.

Jimmie Allen is very deep, about a 90 meters or so.  I came up with who Jimmie was by posing a question?  What happens to someone when grace steps in?  Antoine de Saint-Exupéry was the inspiration for my Jimmie Allen. The mischievous, curious, young Jimmie Allen mirrored St. Ex as a boy quite well.  But what happens to the boy when he goes off to war and becomes a man?  Who is Jimmie Allen then?  I thought about St Ex’s death and wondered, what if I gave him an alternative ending?  What if in July, 1944, flying his P-38 on a photo mission between Marseilles and Cassis France in preparation for the Allied landing, Antoine de Saint-Exupéry didn’t die. It is accepted that St Ex was very depressed, struggling with his age and deteriorating health near the end of his life. Some believe his death in the P-38 was suicide.  I was not there so I do not presume to know.  What if, sinking in the Balearic Sea with water rushing in his canopy, grace stepped in. In that instant, all things that didn’t seem possible started to happen for him.  The canopy opened, the belts unlocked, he swam to the surface with the strength of a younger man, and looked around him.  I asked what would St. Ex do next?  Swim to the nearby uninhabited island of Riou or swim toward the coastline of war-torn France.  And if he choose the island of Riou; a metaphor for the peace, ease, and tranquility that nature and a quiet life can provide.  I wondered how different St Ex might have been?  Much happier I imagine and I like to make people happy.  A little Mozart killed and resurrected.  I would love to read what St Ex wrote on the island.  His writing had gotten very dark and he was obsessing with God’s business.  Politics, nations, and war.  Writing about things he could do little to change.  St. Ex is beloved worldwide and I would never be disrespectful of that fact, I love him too.  So I made a second Antoine de Saint-Exupéry in my head. Brought him back to life, one year after his death on his birthday, June 29,1945.   I relocated him to the West Coast of the US.  Growing up  around the San Juan Islands, well off and privileged.  A little Mozart.  Brilliant and full of promise. I named him Jimmie Allen.

To figure out the mannerisms of Jimmie Allen for the Comic artist Mary Claire to draw, I read everything I hadn’t read by Saint-Exupéry and went further into his head using MBTI and astrology.  I wanted to mirror Jimmie Allen’s life choices closely to St Ex, but set him in a real time.  Combine history with fiction.  It was very fun imagining detail’s of him to Mary Claire.  In the comic Jimmie Allen’s parallel, with Saint-Exupéry flying for the Aeropostale, was his time as a pilot with the Pacific Aerial Surveys Company.  Flying photo missions in P-38’s, mapping the coast of Washington state from 1965-1968.  It was a real company that used P-38’s.  The friends he met there were Jimmie’s ‘Band of Brothers.’   Included in his group of co-workers was Jimmie’s real brother.   On their one day off each week, they would all go over to Allan Island to escape.  It is a real place too.   An island, once owned by billionaire Paul Allen, with a long grass strip down the center of it in the San Juan’s.  They would explore, swim, laugh, and brings girls when they could find cute one’s to go with them.  It didn’t much matter, the Band of Brothers, enjoyed each others company best.  They called themselves the Knights of the Air.   There was a lighthouse on Allan island that I borrowed, with artistic license from nearby Borrows Island, and transplanted it there.   At night they would all climb to the top and watch the stars, or the storms roll in, together.  The Vietnam war was their time frame.  The Knights of the Air all went off to war in different ways, and some in different branches of the military.  On the night before they left, they signed an oath.  Fourteen friends promising to rendezvous again, under the beacon, on Allan Island.

As poet guides of infinite space.  We have pledged our lives to safeguard the cargo of cherished hopes and precious interests entrusted to us, as Shepherd’s of the Air.  We alone have flown below the clouds and embraced the landscapes we crossed as our treasured friends. Though we leave our brother’s here tonight, to fight for our country as  is our duty, we will never again be the pilots of destruction.  Those of us that have not fallen, vow to rendezvous to continue our Noble Crusades.  To seek our successors and ensure our line to continue; to that we commit our lives to protect.  For we are the Knights of the Air.  We are Gardeners of Men.

Not to give the plot away, but I gave Jimmie Allen the same view of man’s inhumanity as St Exupéry had seen.  A realistic and not a romantic one.  He returned to Allan island.  A little Mozart murdered.  Broken.  Suffering from survivors guilt and depression.  Memories eating him alive from the inside.  Sitting under the beacon alone, holding the pledge in his hands, Jimmie plans to commit suicide.  Grace steps in.  Jimmie Allen wakes up the next day believing he is Antoine de Saint-Exupéry. 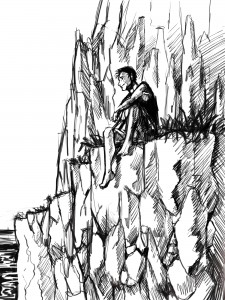 There were two other characters in the story.  Two kids named Sarah and Buck.  I named and modeled Buck after the noble sled dog in Jack London’s Call of the Wild.  Buck had seen enough of ‘the Law of Club and Fang’ and left to explore on his boat after college.  Returning to the wild.  A storm forces Buck to land on Allan Island.  He meets Jimmie and stay’s.  He’s quite happy hanging out with the guy who thinks he’s St Exupéry.  Reading, building, writing, playing music, inventing things. They enjoy each other’s company immensely.   I gave Buck and Jimmie a very interesting way of communicating. They wrote what they had to say on pieces of paper, then folded the notes into paper airplanes, that they sent flying across the room to each other. 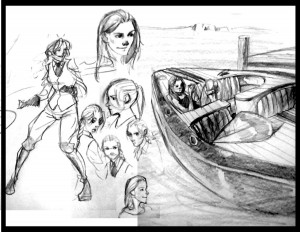 Sarah (me), finds Allan Island by chance after she “borrows” her father’s boat on her birthday.  (I used to “borrow” things from my parents all the time without permission.)  She can’t find a harbor.  Circling the mysterious island, she talks to the cliffs.  Not knowing someone is watching, Jimmie Allen plays a trick on her.  Their conversation went like this…

Jimmie Allen:  Anybody there?

Jimmie Allen: I am.

When Sarah arrives she stirs everything up. Bugging the heck out of Buck at first. The two of them eventually become best friends and dig into Jimmie’s past.  Following the mind-mapping of Jimmie’s mind drawn on the walls of his cave.  Scared geometry, fantastical flying machines, Sator Squares,  fish-shaped submarines, and sign language in Jimmie’s grotto like the hands on the Cosquer cave.   Unraveling history’s mysteries together.  Mirco Pecorari and I had great fun planning it.  The biggest mystery on the Island was, “Who is Jimmie Allen?”  It still is.

This post is longer that I usually write but I have never talked about the comic backstory.  I didn’t read comics except Peanuts, in the Sunday paper, when I was growing up.  I read Shakespeare and Grimm’s Fairy Tales.  I do think comics are a powerful tool to make complex subjects easier to understand but I prefer books with illustrations.  I was not the main character in it, nor was Buck, we were simply opposite sides of the same person.  Jimmie was the star. I think Jimmie Allen is every little Mozart born within each of us.  The divine child.  Wounded by circumstances.  Waiting to come alive again.  Waiting for grace to step in.  Only Jimmie can answer that.

If you see Jimmie Allen, tell him I’m still looking for him. I’d like to thank him.  Building his plane helped me answer a lot of questions in my life.  Selling it to fund a nonprofit will help me to answer a lot more.  I’d like Jimmie to know how grateful I am.  I need his help to solve a riddle I wrote at the beginning of the comic. I don’t know the question, just the answer.  I always come into everything backwards.

Answer:  The only way to survive the past is to remember it.

BTW if you see Jimmie Allen or Antoine de Saint-Exupéry please tell them I wrote a happy ending for everyone, with their own plane to fly.  His name is Blu.  I think that would make both of them very happy too.