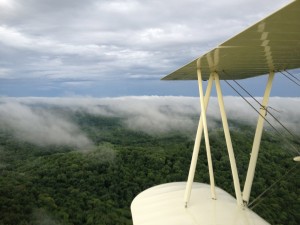 Don’t understand, this was about how hard it is to be smart and a girl.  Being solely judged by your looks when you can fly circles around every male pilot but a handful. Guessing, being watched, yelled at.  I don’t understand how someone who threatened to kill you can shame you?  These sucker punch me, feel everything is fine than a complete 180.  Fog smells hard, like river rocks you pick up and breathe in their mineral scent before they dry. Fog tastes like gray sugar-free flourless sponge cake, flavorless. Fog feels like leaches, slippery cold wet, sucking painlessly on your skin, making you uncomfortable.  Fog looks like titanium white with a hair of cerulean blue, blended with a dirty sable brush dipped in week’s old turpentine.   Fog moves like fear, sluggish and guarded, cowering in the hallows. Fog sounds like holding your breath underwater too long. Fog’s hunch, it’s intuition, is shame.

I stood off to the side of three classes of high school students, waiting to hear me speak.  I had been reading their faces like a weather chart, about to tell them a whether story.  All I saw on the map in front of me was fog, their faces colorless and blurred. I’d been watching them since 9am when they got to the AirPower Expo at McKinney airport, which meant they had been bused in and on the move since well before 8 AM. They were  tired, I could see it in their body language.  Teenager’s bodies are different from those of children and older adults. They have higher levels of the sleep-promoting hormone melatonin at different times of the day.  Making it hard for them to fall asleep until about 11 p.m., and their brains stay in sleep mode until at least 8 a.m. It was now just before lunch and I needed to wake them up to reach them. My only choice was to scare them awake. I called out, “Who’s brave and not afraid what anyone thinks of them?”  Breathe, watch, wait for the fog to lift.  The sleepy eyes started glowing back at me, halogen blue.  They were fearful of shame, and hiding in the recesses of their heavy cantilevered eyelids, in shadowed safety. Looking down at their feet, shuffling their courage to stand up and be vulnerable in front of their peers.  Finally two boys bounced UP, competing to volunteer.

I asked the boy in the back to come forward to me, promising I would not embarrass him. I told him to turn around and put his back to the audience and face north, towards the stage. Then I asked him to take his hand and point to east. Breathe, watch, wait. His right arm slowly went up and pointed right towards the East. Shyly looking at me out of the corner of his eye for approval, I winked at him and nodded.  Next I told him to turn around and face the audience, face south.  This time without hesitation, point to the West. His right arm went out quicker this time, and pointed to the right, towards west.  I did it again and again until he responded instantaneously without hesitation. I explained to the bright faces before me, that this is what I call your Internal Compass.  That no matter which way we’re heading, we are the only navigators of our lives.  We need to instinctively know which way to turn, to use our Internal Compass, to get  back on course when were lost in fog, and afraid. 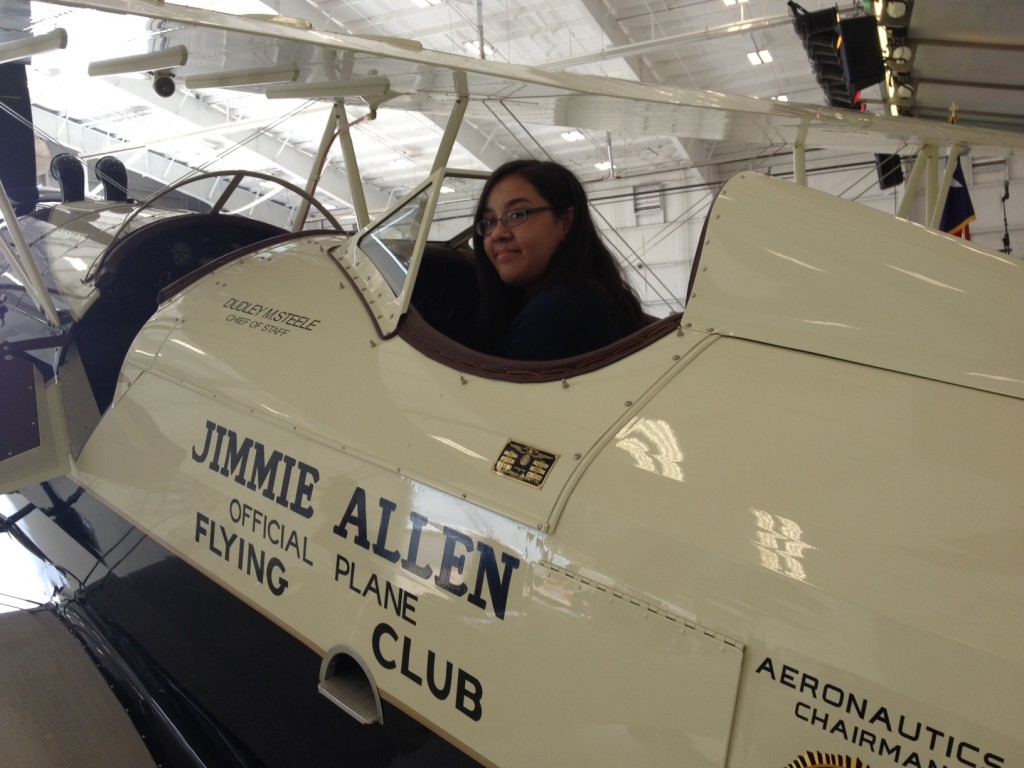 A line of young courage shufflers had formed in front of me and Buddy, patiently waiting their turn to introduce themselves and be able to sit in my cockpit. Bright boy minds, and faces covered in pimples and curiosity, hovered around me. Their attention floating in and out of the mist that rarely leaves a teen’s existence, a home-brewed mind murk of self-consciousness.  I love talking with teenagers, they’re smart, quirky, impetuous, raw and unpolished, just like me. I was having fun, laughing with a boy who was battling some serious ADD, even worse than mine. He was struggling to focus on what he was trying to tell me, when a breeze blew through the fog.  Bella, Isabella flew up to me shyly singing, she was ephemeral.  Isabella said without self doubt or hesitation, that she was designing a hydro-electric triplane, and that her airplane would be fueled by water. Isabella asked me, “Where do you think the ailerons would be, on which wing?  My heart paused, this little mockingbird was special.

The boys mouth’s were frozen but their eyes were actively judging her, trying to diminish her intelligence by objectifying her physically.  Giving her the Up/Down look — an insidious form of judgement that shames people, making them feel they’re not____enough.  Good enough, smart enough, pretty enough. Isabella saw them, and fixed her eyes on me, continuing to sing about her triplane design quietly.  The UP/Down look is leveling, a manipulation tactic of shaming or humbling someone else, in order to put yourself above them.  Everyone has done it, and everyone has had it done to them. The UP/Down is insidious because it is cumulative.  Years of UP/Down looks, of shame, cause internal compass error’s in all of us, rendering our compass unreliable when we need it the most.  I didn’t want that for Isabella.  So I closed the line and shooed the boys away, telling them Isabella was going to get a private tour. I looked UP into her eyes and I told her she was special, that she was courageous, and that she had a water powered triplane to build…and I expected to see her fly it.