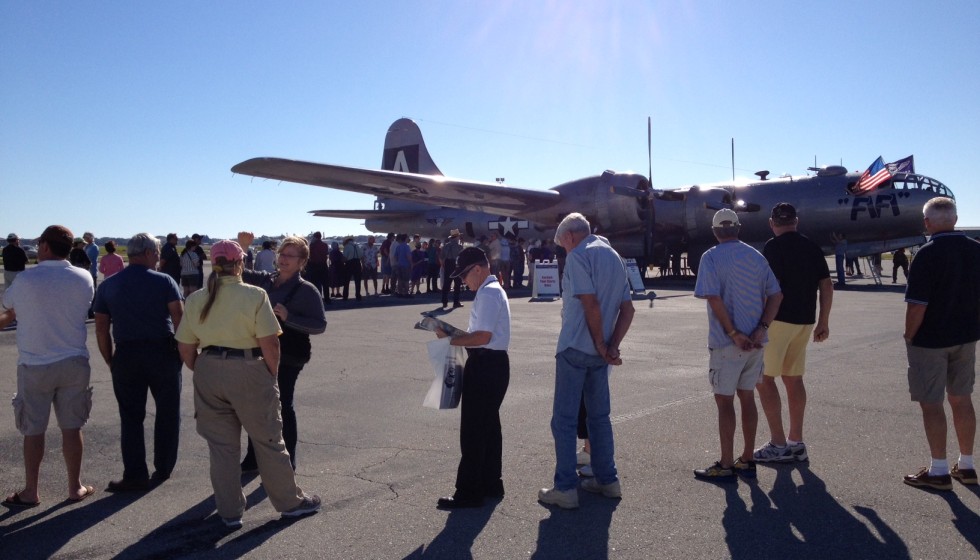 My ears ring tonight as they will more and more.  Flying passengers on tour with FiFi my world is always loud but no one sound seems to stand out.  Instead they all roar in my head at once, clinging to each other in their urgency and volume.  My intercomm competes with the wind and the rumble clicking of my engine and even when I am not flying, their remnants remain in my ears for hours after I’ve landed.  The peaceful space up there, in the air where I am accustomed to playing quietly, offers no escape for me in Class C airspace.  My Speedmail competes for my attention silently, reminding that his needs need to be considered first.  It is my responsibility to hear my plane’s voice above all the noise and chaos, and learn to speak for him.   He has taught me that he can only do for me, what I do for him.  It took a year but by this tour I finally hear what he’s thinking, and that gives me the space to listen to everything else.

By Sunday afternoon the sky was as crowed as the ground in Sarasota. Tampa Approach was doing their best to work with me, and Jon in the C45, as we flew our passengers back and forth along the beach below 1500’.  They were handling both Tampa International and Sarasota jet arrivals, and as a result of all the traffic I was having to keep Approach frequency at full volume.  Climb here, turn there, traffic at your twelve o’clock – all came blasting through my headset, competing with the voice in my front seat.  It was so busy the only thing I could do was respond with my N-number and comply to whatever Approach said.  Then translate their command to my flier nicely.  Rephrase it in familiar terms like, “Hey, how bout you climb us up a little bit higher,” so they would remain relaxed and enjoy the flight.   By the second flight the airspace had really heated up and the pitch of the approach controllers voice raised as he became more frustrated.  I was trying to teach my customer how to use the roll wires to do a turn, and I missed one of Tampa’s calls to me.  As a result I was sent to detention for not paying attention, and told curtly, “667K I need you to climb immediately to 2900.”  What Tampa approach wasn’t saying was that we were becoming a problem in the system, and they were running out of options to provide us with separation.  It was just too crowed up there in the air above Sarasota, but not nearly as crowded as I knew it would be on the ramp.  I am rarely afraid of flying, but I am often afraid of landing.  What I encounter in the sky is far less intimidating to me than what I encounter on the ground.

At three thousand feet on downwind Tampa Approach turned us back over to Sarasota and the gentle voice in the tower cleared us to land immediately.  Requesting I make a short approach, “Straight to the numbers Speedmail.”  Adding kindly the current wind direction, and anticipating our needs in knowing that it would be the only information I cared about.  After we turned off the runway the tower advised the military transport that they didn’t need to extend any further, the traffic he was following was clear of the runway.  What the tower didn’t say was that they had held up a large military transport for us to get in first.  That kindness felt like someone holding the door open for me as I rushed inside, just before a storm. Everyone in the tower knew we were working in a challenging environment, with shifting winds, and an old biplane and his pilot could use all the help we could get.  Buddy was thinking this would be his last flight today, and I thanked the tower for both of us as he wagged his tail happily, taxing back toward his adoring fan club waiting for him on the ramp.  My plane loves attention, it is part of his heritage and I believe it is important that non-aviation people see the antique airplanes they rarely get up close to, but I do not share his love of attention.   Large groups of people overwhelm me pretty quickly, in fact they scare the hell out of me, and I rubbed my temples in anticipation.

Buddy’s prop had barely stopped spinning as the crowds crowded in around us.  It was mid afternoon and the ramp was packed with people, all talking at once. Crowds have a personality.  A collective vibe to them that shifts hourly depending on environmental conditions and line length, and this one felt anxious.  I was trying to get my flier out of the front seat, to take souvenir pictures after our flight together, when a group of men threw questions up the wing at me impatiently.  My customer’s pay $600.00 to fly with us and they deserve every minute of my complete attention, even after we’ve landed.  I tried to explain, “I will be with you in a few minutes, when I am done with my customer.”  But they weren’t listening and kept talking to my back as I unloaded him and took pictures by Buddy.  My ears were full of wind noise and echoes of ATC and I couldn’t get them to clear as questions disolved into sound bites.  A series of disconnected words instead of sentences, that I had to piece together mentally before I could reply.  I felt like I was listening underwater.  I imagined their mouth’s moving open and closed over my shoulder, like fish breathing underwater with me.  I needed some air.  I climbed back in Buddy to lock his ailerons and hunched down in my seat and whispered, “I’m sorry man, I got to get out of here.”  I knew he was thinking that I don’t get to leave him alone when the ramp is really busy.  It is my job to watch out for him because they will climb on his wings.  Most people have no idea he’s covered in fabric and not metal, but I was desperate for silence, even for ten minutes.  I jumped out of the cockpit and headed straight through the crowd toward the FBO entrance.  Telling myself to just keep moving, “Walk with a purpose Sarah, don’t make eye contact.”  I only got halfway to the door before a hand touched my arm and said, “Excuse me Ma’am, you’re the Stearman pilot right?  Can I ask you a question?”  Then another and another and another.  I never made it to the FBO.  I stood against the wall, twenty feet from the FBO door trapped.  Listening to story after story while looking at my plane surrounded by people, looking back at me surround by people.  I was a deserter, caught abandoning my post.  A line from Top Gun bitch slapped my inner coward, “Don’t you leave me Maverick!”  I did the walk of shame back to my plane and crawled between his landing gear and wiped oil off his belly, as a silent gesture of apology and my ears started to clear along with the crowd.  A man with timid eyes was watching me through Buddy’s speedring.  I smiled at him and he got up the courage to speak to me and tell me his story, which started with a question. “Why does your engine have an odd number of cylinders?”

For hours they came and went as I sat under Buddy’s gear, each telling a story which had little to do with aviation but began with a question about my plane.  A women with swollen feet sat on Buddy’s tire and talked of grandchildren and being a widow after she asked me, “Why do your tires not have tread on them?”  An older man told me of his bone cancer and how he was going to die this year after he asked me, “Why is your rudder shaped differently than the other biplane’s?”  None of them could say what they really wanted to say.  Buddy knew what they wanted to say and reminded me gently I should not have tried to runaway to the FBO, but instead stayed with him.  “I know you don’t like crowds like I do, but I can’t protect you up there, if you don’t protect me down here.”  He said to me silently, “Sometimes what people don’t say, says more than what they do say.  They’re lonely Sarah, and for some reason talking about a plane like me, is the only way they can begin to talk about themselves.  On tour, it is our job to listen.”